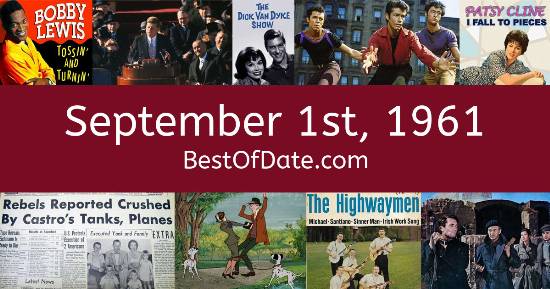 Songs that were on top of the music singles charts in the USA and the United Kingdom on September 1st, 1961.

The movie "Come September" was at the top of the box office on September 1st, 1961.

The date is September 1st, 1961 and it's a Friday. Anyone born today will have the star sign Virgo. Currently, people have "that Friday feeling" and are looking forward to the weekend.

Schools and colleges are starting again and Autumn has officially arrived. As a result, temperatures are beginning to cool and trees are starting to shed their leaves. In the United States, it is the Friday before Labor Day weekend and many Americans are planning barbecues and other gatherings. In America, the song Wooden Heart by Joe Dowell is on top of the singles charts.

Over in the UK, Johnny Remember Me by John Leyton is the number one hit song. John Fitzgerald Kennedy is currently the President of the United States and the movie Come September is at the top of the Box Office. In the United Kingdom, Harold Macmillan is the current Prime Minister.

If you were to travel back to this day, notable figures such as Marilyn Monroe would be still alive. On TV, people are watching popular shows such as "What's My Line?", "The Jack Benny Program", "The Danny Thomas Show" and "77 Sunset Strip". Children and teenagers are currently watching television shows such as "Tom and Jerry", "Heckle and Jeckle", "The Huckleberry Hound Show" and "The Yogi Bear Show".

If you're a kid or a teenager, then you're probably playing with toys such as BAS-KET Miniature Basketball, the Hula Hoop, Barbie and Ken (doll).

If you are looking for some childhood nostalgia, then check out September 1st, 1967 instead.

Irish TV presenter.
Born on September 1st, 1964
He was born exactly 3 years after this date.

English soccer player.
Born on September 1st, 1989
He was born exactly 28 years after this date.

Actress.
Born on September 1st, 1996
She was born exactly 35 years after this date.

BTS member.
Born on September 1st, 1997
He was born exactly 36 years after this date.

John Fitzgerald Kennedy was the President of the United States on September 1st, 1961.

Harold Macmillan was the Prime Minister of the United Kingdom on September 1st, 1961.

Have something to say about September 1st, 1961?

Enter your date of birth below to find out how old you were on September 1st, 1961.

Here are some fun statistics about September 1st, 1961.