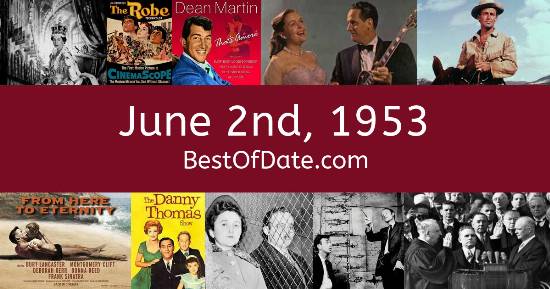 The best-selling single on June 2nd, 1953 was "The Song from Moulin Rouge (Where Is Your Heart)" by Percy Faith and His Orchestra.

The date is June 2nd, 1953, and it's a Tuesday. Anyone born today will have the star sign Gemini. It's summer, so the temperatures are warmer and the evenings are longer than usual.

In Asia, the Korean War is raging on between South Korea and North Korea. Because it's 1953, radio stations and jukeboxes are playing songs from singers such as Percy Faith, Les Paul, Mary Ford, Patti Page, Eddie Fisher, the Ames Brothers, Teresa Brewer, Les Baxter and Perry Como. On TV, people are watching popular shows such as "The Lone Ranger", "Space Patrol", "The George Burns and Gracie Allen Show" and "Racket Squad".

Children and teenagers are currently watching television shows such as "Looney Tunes", "Tom and Jerry", "Crusader Rabbit" and "Adventures of Superman". If you're a kid or a teenager, then you're probably playing with toys such as Dimestore soldiers, Foto-Electric Baseball, Tiny Tears (doll) and Roy Rogers Plastic Figures.

These are trending news stories and fads that were prevalent at this time. These are topics that would have been in the media on June 2nd, 1953.

Check out our personality summary for people who were born on June 2nd, 1953.

If you are looking for some childhood nostalgia, then you should check out June 2nd, 1959 instead.

Actor.
Born on June 2nd, 1954
He was born exactly one year after this date.

Youtube personality. Deceased
Born on June 2nd, 1984
She was born exactly 31 years after this date.

Argentine soccer player.
Born on June 2nd, 1988
He was born exactly 35 years after this date.

Canadian streamer.
Born on June 2nd, 1994
He was born exactly 41 years after this date.

Dwight David Eisenhower was the President of the United States on June 2nd, 1953.

Winston Churchill was the Prime Minister of the United Kingdom on June 2nd, 1953.

Enter your date of birth below to find out how old you were on June 2nd, 1953.
This information is not transmitted to our server.

Here are some fun statistics about June 2nd, 1953.