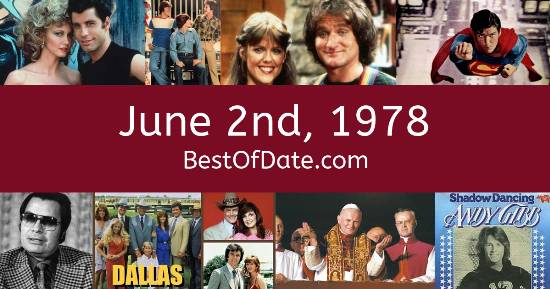 Songs that were on top of the music singles charts in the USA and the United Kingdom on June 2nd, 1978.

The date is June 2nd, 1978 and it's a Friday. Anyone born today will have the star sign Gemini. Currently, people have "that Friday feeling" and are looking forward to the weekend.

It's summer, so the temperatures are warmer and the evenings are longer than usual. In America, the song Too Much Too Little Too Late by Johnny Mathis & Deniece Williams is on top of the singles charts. Over in the UK, Rivers Of Babylon by Boney M is the number one hit song.

In Argentina, the 1978 FIFA World Cup is currently taking place. On TV, people are watching popular shows such as "Starsky & Hutch", "Charlie's Angels", "Chips" and "The Love Boat". Meanwhile, gamers are playing titles such as "Pursuit", "Gun Fight" and "Breakout".

Kids and teenagers are watching TV shows such as "The Bugs Bunny Show", "Mister Rogers' Neighborhood", "Sesame Street" and "Fat Albert and the Cosby Kids". If you're a kid or a teenager, then you're probably playing with toys such as Magna Doodle, Connect Four, Mattel Electronic Football (handheld game) and Simon (memory game).

If you are looking for some childhood nostalgia, then check out June 2nd, 1984 instead.

Jimmy Carter was the President of the United States on June 2nd, 1978.

James Callaghan was the Prime Minister of the United Kingdom on June 2nd, 1978.

Enter your date of birth below to find out how old you were on June 2nd, 1978.

Here are some fun statistics about June 2nd, 1978.