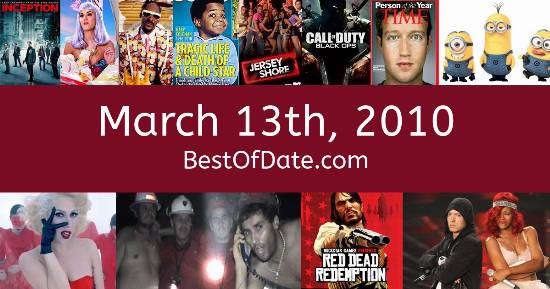 Songs that were on top of the music singles charts in the USA and the United Kingdom on March 13th, 2010.

The date is March 13th, 2010 and it's a Saturday. Anyone born today will have the star sign Pisces. Currently, people are enjoying their weekend.

Spring has started to creep in and the days are beginning to get longer. In America, the song Imma Be by Black Eyed Peas is on top of the singles charts. Over in the UK, Pass Out by Tinie Tempah is the number one hit song.

Barack Obama is currently the President of the United States and the movie Shutter Island is at the top of the Box Office. In the United Kingdom, Gordon Brown is the current Prime Minister. The term "hipster" is currently growing in use. The word is being used to describe people who are pretentious and deliberately anti-mainstream.

The slang phrase "Come at me bro" is starting to become popular on the Internet. A new FPS game "Battlefield: Bad Company 2" has just been released. Rap star Lil Wayne has been sentenced to one year in prison for attempted criminal possession of a weapon.

If you were to travel back to this day, notable figures such as Chris Kanyon, Paul Gray, Gary Coleman and Lance Cade would all be still alive. On TV, people are watching popular shows such as "Last of the Summer Wine", "Dora the Explorer", "Desperate Housewives" and "Glee". Meanwhile, gamers are playing titles such as "Farmville", "Halo 3: ODST", "Call of Duty: Modern Warfare 2" and "Battlefield: Bad Company 2".

Kids and teenagers are watching TV shows such as "Dora the Explorer", "Peppa Pig", "Wizards of Waverly Place" and "The Suite Life on Deck". Popular toys at the moment include the likes of the Xbox 360, Iggle Piggle, ZhuZhu Pets and ZhuZhu Pets.

If you are looking for some childhood nostalgia, then check out March 13th, 2016 instead.

Celebrities, historical figures and other notable people who were born on March 13th.

Colombian soccer player. Deceased
Born on March 13th, 1967
He was not alive on this date.

Barack Obama was the President of the United States on March 13th, 2010.

Gordon Brown was the Prime Minister of the United Kingdom on March 13th, 2010.

Enter your date of birth below to find out how old you were on March 13th, 2010.