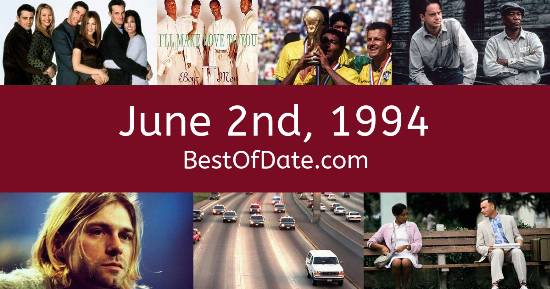 Songs that were on top of the music singles charts in the USA and the United Kingdom on June 2nd, 1994.

The date is June 2nd, 1994, and it's a Thursday. Anyone born today will have the star sign Gemini. It's summer, so the temperatures are warmer and the evenings are longer than usual.

In America, the song I Swear by All-4-One is on top of the singles charts. Over in the UK, Come On You Reds by Manchester United FC & Status Quo is the number one hit song. Bill Clinton is currently the President of the United States, and the movie Maverick is at the top of the Box Office.

In Europe, a war is continuing to rage on in Bosnia and Herzegovina. On the continent of Africa, a horrible event is unfolding, as the Hutu majority in Rwanda attempt to wipe out the Tutsi minority. This genocide began following the assassination of President Juvenal Habyarimana. In celebrity news, pop star Michael Jackson has married Elvis' daughter Lisa Marie Presley. The media is currently speculating whether or not the marriage is a publicity stunt.

The action comedy film "Beverly Hills Cop III", starring Eddie Murphy, has just been released in movie theaters. Meanwhile, "The Flintstones", starring John Goodman and Rick Moranis, has also recently hit the big screen. If you were to travel back to this day, notable figures such as Nicole Brown Simpson, Andrés Escobar, Raul Julia and Eazy E would all be still alive. On TV, people are watching popular shows such as "In the Heat of the Night", "Martin", "Dr. Quinn, Medicine Woman" and "Beavis and Butt-Head".

Meanwhile, gamers are playing titles such as "Tiny Toon Adventures 2: Trouble in Wackyland", "Syndicate", "Gunstar Heroes" and "NBA Jam". Kids and teenagers are watching TV shows such as "Dink, the Little Dinosaur", "Blossom", "Living Single" and "Biker Mice from Mars". If you're a kid or a teenager, then you're probably playing with toys such as Pogo ball / Lolo ball, the Game Boy, Super Soaker (water gun) and Power Rangers figures.

These are trending news stories and fads that were prevalent at this time. These are topics that would have been in the media on June 2nd, 1994.

Check out our personality summary for people who were born on June 2nd, 1994.

Television shows that people were watching in June, 1994.

Popular video games that people were playing in June of 1994.

If you are looking for some childhood nostalgia, then you should check out June 2nd, 2000 instead.

Bill Clinton was the President of the United States on June 2nd, 1994.

John Major was the Prime Minister of the United Kingdom on June 2nd, 1994.

Enter your date of birth below to find out how old you were on June 2nd, 1994.
This information is not transmitted to our server.

Here are some fun statistics about June 2nd, 1994.