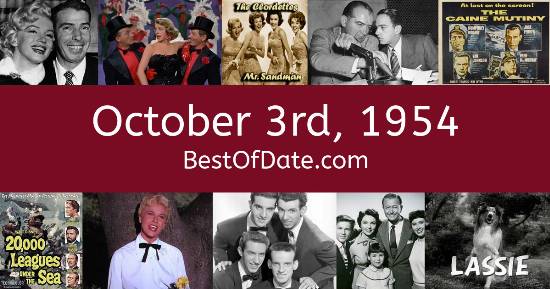 The best-selling single on October 3rd, 1954 was "Hey There" by Rosemary Clooney.

The date is October 3rd, 1954, and it's a Sunday. Anyone born today will have the star sign Libra. Currently, people are enjoying their weekend.

The summer is long gone. Temperatures have started to become much cooler and the evenings are beginning to get darker. Fallen leaves have carpeted driveways, lawns, pathways and sidewalks and there's a fresh earthy scent in the ear. In music, the song "Hey There" by Rosemary Clooney is the best-selling record at the moment.

Dwight David Eisenhower is currently the President of the United States, and Winston Churchill is the Prime Minister of the United Kingdom. In fashion, women are sporting the popular "The New Look" by Christian Dior. This formal style includes rounded shoulders, a full-skirted silhouette and a tight waist. Meanwhile, men are beginning to follow a new "Teddy Boy" trend that involves greased-back hair, extremely narrow trousers and velvet-collared jackets. Because it's 1954, anyone listening to a jukebox or radio station is likely to hear songs from artists such as Kitty Kallen, Perry Como, Rosemary Clooney, The Crew-Cuts, Jo Stafford, Eddie Fisher, The Four Knights, The Four Aces and Doris Day.

If you were to travel back to this day, notable figures such as Albert Einstein and James Dean would be still alive. On TV, people are watching popular shows such as "Space Patrol", "You Bet Your Life", "The Jack Benny Program" and "Sky King". Kids and teenagers are watching TV shows such as "Tom and Jerry", "Crusader Rabbit", "Adventures of Superman" and "Father Knows Best".

If you're a kid or a teenager, then you're probably playing with toys such as Tonka trucks, Colorforms, Feed the Elephant and Matchbox toy cars.

These are trending news stories and fads that were prevalent at this time. These are topics that would have been in the media on October 3rd, 1954.

News stories and other events that happened around October 3rd, 1954.

Check out our personality summary for people who were born on October 3rd, 1954.

Television shows that people were watching in October, 1954.

If you are looking for some childhood nostalgia, then you should check out October 3rd, 1960 instead.

Drummer.
Born on October 3rd, 1962
He was born exactly 8 years after this date.

Singer.
Born on October 3rd, 1969
She was born exactly 15 years after this date.

Actress.
Born on October 3rd, 1973
She was born exactly 19 years after this date.

Singer.
Born on October 3rd, 1975
She was born exactly 21 years after this date.

Soccer player.
Born on October 3rd, 1981
He was born exactly 27 years after this date.

Singer.
Born on October 3rd, 1984
She was born exactly 30 years after this date.

Dwight David Eisenhower was the President of the United States on October 3rd, 1954.

Winston Churchill was the Prime Minister of the United Kingdom on October 3rd, 1954.

Find out what your age was on October 3rd, 1954, by entering your DOB below.
This information is not saved on our server.

Here are some fun statistics about October 3rd, 1954.