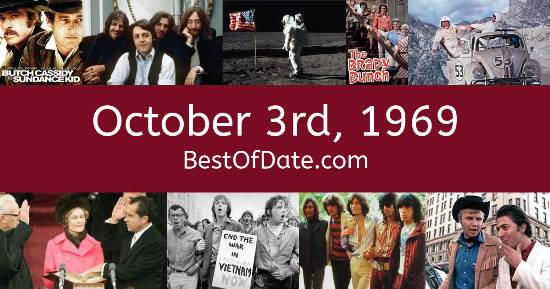 Songs that were on top of the music singles charts in the USA and the United Kingdom on October 3rd, 1969.

The date is October 3rd, 1969, and it's a Friday. Anyone born today will have the star sign Libra. Currently, people have "that Friday feeling" and are looking forward to the weekend.

The summer is long gone. Temperatures have started to become much cooler and the evenings are beginning to get darker. Fallen leaves have carpeted driveways, lawns, pathways and sidewalks and there's a fresh earthy scent in the ear. In America, the song Sugar Sugar by The Archies is on top of the singles charts.

Over in the UK, Bad Moon Rising by Creedence Clearwater Revival is the number one hit song. Richard Nixon is currently the President of the United States, and the movie Bonnie and Clyde is at the top of the Box Office. In the United Kingdom, Harold Wilson is the current Prime Minister.

In fashion, a new "hippie subculture" has emerged, bringing with it laid back Bohemian styles. Frayed bell-bottomed jeans, Jesus sandals, crushed velvet suits and bright tie-dye t-shirts are all popular items of clothing at the moment. It's 1969, so radio stations are playing hit songs from artists such as The Beatles, The Rolling Stones, Zager & Evans, The Archies, The 5th Dimension and Elvis Presley. A Western film called "Butch Cassidy and the Sundance Kid" is being shown in movie theaters at the moment.

If you were to travel back to this day, notable figures such as Tammi Terrell, Jimi Hendrix, Janis Joplin and Charles de Gaulle would all be still alive. On TV, people are watching popular shows such as "I Dream of Jeannie", "Rowan & Martin's Laugh-In", "Room 222" and "Marcus Welby, M.D.". Kids and teenagers are watching TV shows such as "Lassie", "JOT the Dot", "Aquaman" and "The Brady Bunch".

If you're a kid or a teenager, then you're probably playing with toys such as Tonka trucks, Operation, Suzy Homemaker and Snoopy Astronaut (figure).

These are trending news stories and fads that were prevalent at this time. These are topics that would have been in the media on October 3rd, 1969.

News stories, pop culture trends, and other events that happened around October 3rd, 1969.

Check out our personality summary for people who were born on October 3rd, 1969.

If you are looking for some childhood nostalgia, then you should check out October 3rd, 1975, instead.

Celebrities, historical figures, and other notable people who were born on October 3rd.

Backstreet Boys.
Born on October 3rd, 1971
He was born exactly 2 years after this date.

Actress.
Born on October 3rd, 1973
She was born exactly 4 years after this date.

Singer.
Born on October 3rd, 1975
She was born exactly 6 years after this date.

Soccer player.
Born on October 3rd, 1981
He was born exactly 12 years after this date.

Singer.
Born on October 3rd, 1984
She was born exactly 15 years after this date.

Richard Nixon was the President of the United States on October 3rd, 1969.

Find out what your age was on October 3rd, 1969, by entering your DOB below.
This information is not saved on our server.

Here are some fun statistics about October 3rd, 1969.