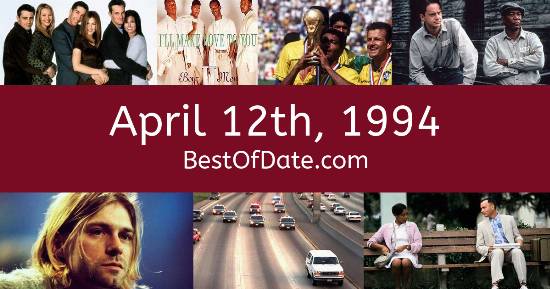 Songs that were on top of the music singles charts in the USA and the United Kingdom on April 12th, 1994.

The date is April 12th, 1994 and it's a Tuesday. Anyone born today will have the star sign Aries. The summer of 1994 is drawing closer and temperatures have started to rise.

In America, the song Bump N' Grind by R. Kelly is on top of the singles charts. Over in the UK, Everything Changes by Take That is the number one hit song. Bill Clinton is currently the President of the United States and the movie D2: The Mighty Ducks is at the top of the Box Office.

In Europe, a war is continuing to rage on in Bosnia and Herzegovina. In television news, a new sitcom called "Sister, Sister", which chronicles the lives of two reunited twins called Tia Landry and Tamera Campbell, has recently premiered on ABC. On the continent of Africa, a horrible event is unfolding, as the Hutu majority in Rwanda attempt to wipe out the Tutsi minority. This genocide began following the assassination of President Juvenal Habyarimana.

Meanwhile, in celebrity news, "Beverly Hills, 90210" actress Shannen Doherty has filed for divorce from actor Ashley Hamilton after less than a year of marriage. People are currently shocked by the news that Nirvana lead singer Kurt Cobain has been found dead at his home in Lake Washington, Seattle. His death has been declared a suicide. It is believed that Cobain may have been dead for a couple of days before his body was discovered. In music news, American punk rock band The Offspring have released their new album "Smash".

If you were to travel back to this day, notable figures such as Richard Nixon, Nicole Brown Simpson, Andrés Escobar and Raul Julia would all be still alive. On TV, people are watching popular shows such as "Married... with Children", "Melrose Place", "Star Trek: Deep Space Nine" and "Ellen". Meanwhile, gamers are playing titles such as "Tiny Toon Adventures 2: Trouble in Wackyland", "Shinobi III: Return of the Ninja Master", "Gunstar Heroes" and "Myst".

Kids and teenagers are watching TV shows such as "Roseanne", "Clarissa Explains It All", "Animaniacs" and "The Nanny". If you're a kid or a teenager, then you're probably playing with toys such as the Game Boy, Littlest Pet Shop, Mighty Max and Jurassic Park: Young Tyrannosaurus Rex.

If you are looking for some childhood nostalgia, then check out April 12th, 2000 instead.

Gun control activist.
Born on April 12th, 2000
He was born exactly 6 years after this date.

Bill Clinton was the President of the United States on April 12th, 1994.

John Major was the Prime Minister of the United Kingdom on April 12th, 1994.

Enter your date of birth below to find out how old you were on April 12th, 1994.