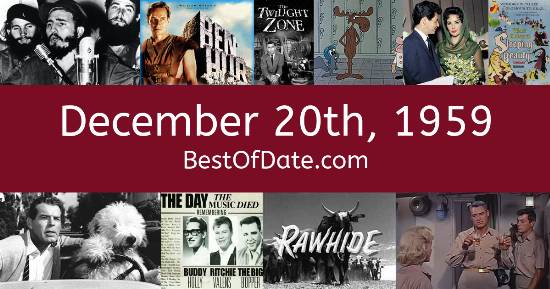 December 20th, 1959 relates to an event in a movie, book, game or television series:

The date is December 20th, 1959 and it's a Sunday. Anyone born today will have the star sign Sagittarius. Currently, people are enjoying their weekend.

Christmas Day of 1959 is fast approaching and the excitement is building. Department stores are thronged with Christmas shoppers. In music, the song "Heartaches" by the Number is the best-selling record at the moment. Dwight David Eisenhower is currently the President of the United States and Harold Macmillan is the Prime Minister of the United Kingdom.

On TV, people are watching popular shows such as "77 Sunset Strip", "Bonanza", "The Twilight Zone" and "The Untouchables". Children and teenagers are currently watching television shows such as "Tom and Jerry", "Lassie", "The Rifleman" and "The Many Loves of Dobie Gillis". If you're a kid or a teenager, then you're probably playing with toys such as "Crater Critters".

Children's and Teen TV shows that would have been airing on this date in 1959.

Toys and games that would have been popular on this date in 1959:

Celebrities, historical figures and noteable people who were born on the 20th of December:

Who was the Prime Minister of the United Kingdom on December 20th, 1959?

Enter your date of birth below to find out how old you were on December 20th, 1959.

Looking for some nostalgia? Here are some Youtube videos relating to December 20th, 1959. Please note that videos are automatically selected by Youtube and that results may vary! Click on the "Load Next Video" button to view the next video in the search playlist. In many cases, you'll find episodes of old TV shows, documentaries, music videos and soap dramas.

Here are some fun statistics about December 20th, 1959.