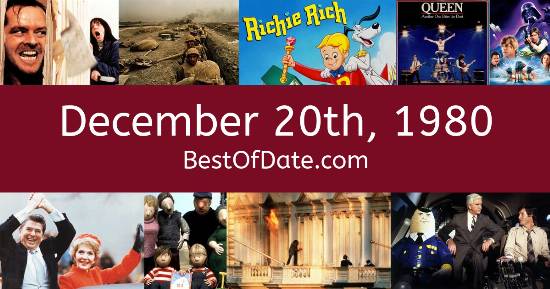 Songs that were on top of the music singles charts in the USA and the United Kingdom on December 20th, 1980.

The date is December 20th, 1980 and it's a Saturday. Anyone born today will have the star sign Sagittarius. Currently, people are enjoying their weekend.

Christmas Day of 1980 is fast approaching and the excitement is building. Department stores are thronged with Christmas shoppers. In America, the song Lady by Kenny Rogers is on top of the singles charts. Over in the UK, Starting Over by John Lennon is the number one hit song.

On TV, people are watching popular shows such as "Little House on the Prairie", "Eight Is Enough", "Taxi" and "Mork & Mindy". Meanwhile, gamers are playing titles such as "Breakout", "Space Invaders", "Pac-Man" and "Missile Command". Children and teenagers are currently watching television shows such as "The Bugs Bunny Show", "Mister Rogers' Neighborhood", "Fat Albert and the Cosby Kids" and "Cockleshell Bay".

If you're a kid or a teenager, then you're probably playing with toys such as Micronauts, Lego Technic, Water Ring Toss and Rubik's Cube.

Celebrities, historical figures and notable people who were born on the 20th of December.

Jimmy Carter was the President of the United States on December 20th, 1980.

Margaret Thatcher was the Prime Minister of the United Kingdom on December 20th, 1980.

Enter your date of birth below to find out how old you were on December 20th, 1980.

Here are some fun statistics about December 20th, 1980.

Leave a comment and tell everyone why December 20th, 1980 is important to you.