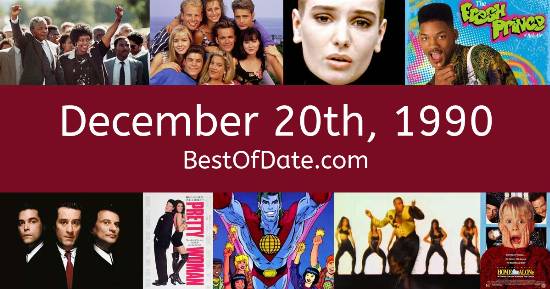 These songs were on top of the music charts in the United States and the United Kingdom on December 20th, 1990.

The date is December 20th, 1990, and it's a Thursday. Anyone born today will have the star sign Sagittarius. Christmas Day of 1990 is fast approaching and the excitement is building. Department stores are thronged with Christmas shoppers.

The fantasy romance film "Edward Scissorhands", starring Johnny Depp and Winona Ryder, is currently being shown in movie theaters. In celebrity news, British rock singer Rod Stewart and supermodel Rachel Hunter have been married in Beverly Hills. In Europe, the Soviet Union is continuing to dissolve.

If you were to travel back to this day, notable figures such as John Bardeen, Miles Davis and Freddie Mercury would all be still alive. On TV, people are watching popular shows such as "'Allo 'Allo!", "Quantum Leap", "Family Matters" and "One Foot in the Grave". Meanwhile, gamers are playing titles such as "Paperboy", "SimCity", "Super Mario Land" and "World Cup Italia '90".

Kids and teenagers are watching TV shows such as "Growing Pains", "Full House", "Babar" and "In Living Color". If you're a kid or a teenager, then you're probably playing with toys such as Screwball Scramble, Pogo ball / Lolo ball, the Nintendo Entertainment System and Teenage Mutant Hero Turtles figures.

These are trending news stories and fads that were prevalent at this time. These are topics that would have been in the media on December 20th, 1990.

Check out our personality summary for people who were born on December 20th, 1990.

If you are looking for some childhood nostalgia, then you should check out December 20th, 1996 instead.

Soccer player.
Born on December 20th, 1991
He was born exactly one year after this date.

Chinese actor.
Born on December 20th, 1998
He was born exactly 8 years after this date.

George W. Bush Snr. was the President of the United States on December 20th, 1990.

John Major was the Prime Minister of the United Kingdom on December 20th, 1990.

Enter your date of birth below to find out how old you were on December 20th, 1990.
This information is not transmitted to our server.

Here are some fun statistics about December 20th, 1990.