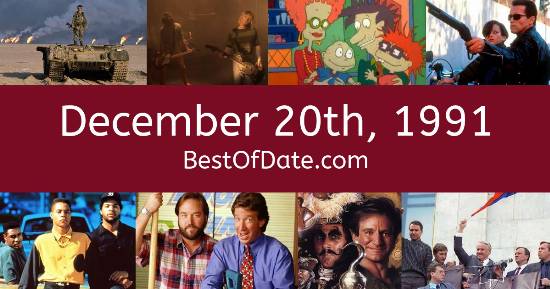 These songs were on top of the music charts in the United States and the United Kingdom on December 20th, 1991.

The top "Box Office" movie on this date was the film "Star Trek VI: The Undiscovered Country".

The date is December 20th, 1991, and it's a Friday. Anyone born today will have the star sign Sagittarius. Currently, people have "that Friday feeling" and are looking forward to the weekend.

Christmas Day of 1991 is fast approaching and the excitement is building. Department stores are thronged with Christmas shoppers. In America, the song Black Or White by Michael Jackson is on top of the singles charts. Over in the UK, Bohemian Rhapsody / These Are The Days Of Our Lives by Queen is the number one hit song.

George W. Bush Snr. is currently the President of the United States, and the movie Star Trek VI: The Undiscovered Country is at the top of the Box Office. In the United Kingdom, John Major is the current Prime Minister. Texting is not a thing yet. Instead, people are using landline phones and pagers. Furthermore, the vast majority of people still have no idea what "the Internet" is.

A rock subgenre called "Grunge" is starting to rise in popularity. In Europe, the Soviet Union is coming to an end as the leaders of Russia, Belarus and Ukraine agree to dissolve the union. The film Hook, starring Robin Williams, is currently showing in movie theaters.

If you were to travel back to this day, notable figures such as Robert Reed and Anthony Perkins would be still alive. On TV, people are watching popular shows such as "'Allo 'Allo!", "The Golden Girls", "One Foot in the Grave" and "Step by Step". Meanwhile, gamers are playing titles such as "SimCity", "Phantasy Star II", "Sonic the Hedgehog" and "F-Zero".

These are trending news stories and fads that were prevalent at this time. These are topics that would have been in the media on December 20th, 1991.

Check out our personality summary for people who were born on December 20th, 1991.

Television shows that people were watching in December, 1991.

Popular video games that people were playing in December of 1991.

If you are looking for some childhood nostalgia, then you should check out December 20th, 1997, instead.

Celebrities, historical figures, and other notable people who were born on December 20th.

Chinese actor.
Born on December 20th, 1998
He was born exactly 7 years after this date.

Soccer player.
Born on December 20th, 1998
He was born exactly 7 years after this date.

George W. Bush Snr. was the President of the United States on December 20th, 1991.

Enter your date of birth below to find out how old you were on December 20th, 1991.
This information is not transmitted to our server.

Here are some fun statistics about December 20th, 1991.