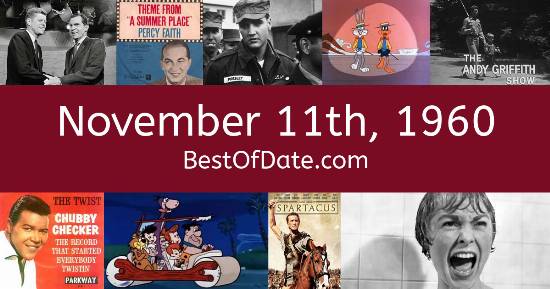 These songs were on top of the music charts in the United States and the United Kingdom on November 11th, 1960.

The movie "Midnight Lace" was at the top of the Box Office on this day.

The date is November 11th, 1960, and it's a Friday. Anyone born today will have the star sign Scorpio. Currently, people have "that Friday feeling" and are looking forward to the weekend.

It's November, so the evenings are getting darker and the days are getting colder. In America, the song Save The Last Dance For Me by The Drifters is on top of the singles charts. Over in the UK, It's Now Or Never by Elvis Presley is the number one hit song.

Dwight David Eisenhower is currently the President of the United States, and the movie Midnight Lace is at the top of the Box Office. In the United Kingdom, Harold Macmillan is the current Prime Minister. Tailfins on cars are extremely popular at the moment. The design looks futuristic, almost like a rocket or the twin rudders on the back of an airplane.

On TV, people are watching popular shows such as "The Ed Sullivan Show", "You Bet Your Life", "The Jack Benny Program" and "The Twilight Zone". Kids and teenagers are watching TV shows such as "Captain Pugwash", "The Rifleman", "Bozo: The World's Most Famous Clown" and "King Leonardo and His Short Subjects". Popular toys at the moment include the likes of BAS-KET Miniature Basketball, Metal House robots, Tonka trucks and Astrobase.

These are trending news stories and fads that were prevalent at this time. These are topics that would have been in the media on November 11th, 1960.

News stories, pop culture trends, and other events that happened around November 11th, 1960.

Check out our personality summary for people who were born on November 11th, 1960.

Television shows that people were watching in November, 1960.

If you are looking for some childhood nostalgia, then you should check out November 11th, 1966, instead.

Actress.
Born on November 11th, 1962
She was born exactly 2 years after this date.

Actress.
Born on November 11th, 1964
She was born exactly 4 years after this date.

Soccer player.
Born on November 11th, 1983
He was born exactly 23 years after this date.

Dwight David Eisenhower was the President of the United States on November 11th, 1960.

Find out what your age was on November 11th, 1960, by entering your DOB below.
This information is not saved on our server.

Here are some fun statistics about November 11th, 1960.