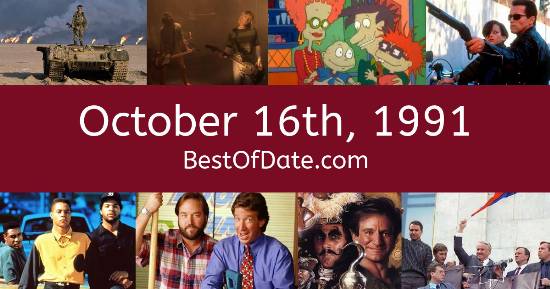 Songs that were on top of the music singles charts in the USA and the United Kingdom on October 16th, 1991:

The date is October 16th, 1991 and it's a Wednesday. Anyone born today will have the star sign Libra. The summer is long gone. Temperatures have started to become much cooler and the evenings are beginning to get darker.

George W. Bush Snr. is currently the President of the United States and the movie The Fisher King is at the top of the Box Office. In the United Kingdom, John Major is the current Prime Minister. In fashion, many of the trends from the late 80s are still popular. Colored tights, denim overalls, leotards, flannel shirts and shoulder pads are all fashionable at the moment.

In Europe, the Soviet Union is continuing to dissolve and the KGB has been officially replaced by the SVR. In Texas, 23 people have been killed in a mass shooting at Luby's Cafeteria in Killeen. People are watching popular TV shows such as "Who's the Boss?", "The Golden Girls", "Roseanne" and "Beverly Hills, 90210".

Meanwhile, gamers are playing titles such as "Railroad Tycoon", "Battletoads", "Sonic the Hedgehog" and "Streets of Rage". Children and teenagers are currently watching television shows such as "The Wonder Years", "Beverly Hills, 90210", "The Adventures of Pete & Pete" and "Taz-Mania". If you're a kid or a teenager, then you're probably playing with toys such as "Easy-Bake Oven", "Transformers", "Micro Machines" and "Jenga".

Who was the Prime Minister of the United Kingdom on October 16th, 1991?

Enter your date of birth below to find out how old you were on October 16th, 1991.

Looking for some nostalgia? Here are some Youtube videos relating to October 16th, 1991. Please note that videos are automatically selected by Youtube and that results may vary! Click on the "Load Next Video" button to view the next video in the search playlist. In many cases, you'll find episodes of old TV shows, documentaries, music videos and soap dramas.

Here are some fun statistics about October 16th, 1991.