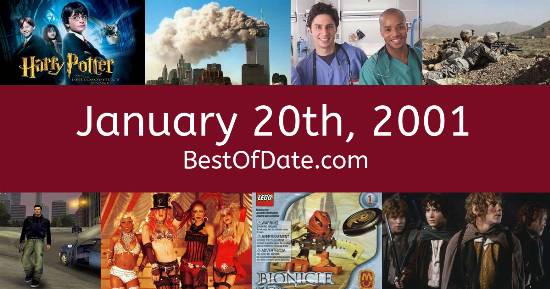 Songs that were on top of the music singles charts in the USA and the United Kingdom on January 20th, 2001.

The date is January 20th, 2001 and it's a Saturday. Anyone born today will have the star sign Aquarius. Currently, people are enjoying their weekend.

In America, the song Independent Women Part 1 by Destiny's Child is on top of the singles charts. Over in the UK, Love Don't Cost A Thing by Jennifer Lopez is the number one hit song. George W. Bush Jnr. is currently the President of the United States and the movie Save the Last Dance is at the top of the Box Office.

Meanwhile, the Nokia 3310 is one of the most popular cell phones on the market at the moment. Stores across the world are currently selling a wide range of custom covers for the phone. It's 2001, so the music charts are being dominated by the likes of Christina Aguilera, Janet Jackson, OutKast, Crazy Town, Destiny's Child, Usher, Alicia Keys, Blu Cantrell and Jennifer Lopez. If you were to travel back to this day, notable figures such as Dale Earnhardt, Joey Ramone, Aaliyah and Thuy Trang would all be still alive.

On TV, people are watching popular shows such as "Stargate SG-1", "Celebrity Deathmatch", "The King of Queens" and "Roswell". Meanwhile, gamers are playing titles such as "Crazy Taxi", "Dead or Alive 2", "Final Fantasy IX" and "Tenchu 2: Birth of the Stealth Assassins". Children and teenagers are currently watching television shows such as "Round the Twist", "The Angry Beavers", "Ed, Edd n Eddy" and "Lizzie McGuire".

Popular toys at the moment include the likes of Gogo's Crazy Bones, Groovy Girls, Razor (scooter) and the PlayStation 2.

If you are looking for some childhood nostalgia, then check out January 20th, 2007 instead.

George W. Bush Jnr. was the President of the United States on January 20th, 2001.

Tony Blair was the Prime Minister of the United Kingdom on January 20th, 2001.

Enter your date of birth below to find out how old you were on January 20th, 2001.

Here are some fun statistics about January 20th, 2001.