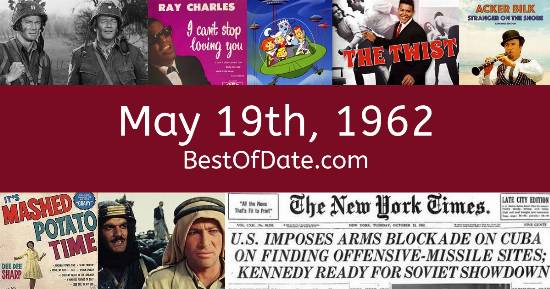 Songs that were on top of the music singles charts in the USA and the United Kingdom on May 19th, 1962.

The date is May 19th, 1962 and it's a Saturday. Anyone born today will have the star sign Taurus. Currently, people are enjoying their weekend.

The summer of 1962 has finally arrived. The weather has warmed up and the evenings are brighter than usual. In America, the song Soldier Boy by Shirelles is on top of the singles charts. Over in the UK, Nutrocker by B. Bumble & Stingers is the number one hit song.

On TV, people are watching popular shows such as "What's My Line?", "The Danny Thomas Show", "Perry Mason" and "The Untouchables". Children and teenagers are currently watching television shows such as "Looney Tunes", "Tom and Jerry", "Captain Kangaroo" and "Davey and Goliath". Popular toys at the moment include the likes of Crater Critters, Troll doll, Astrobase and Rock-a-Stack.

Notable events that occurred around May 19th, 1962.

Celebrities, historical figures and notable people who were born on the 19th of May.

John Fitzgerald Kennedy was the President of the United States on May 19th, 1962.

Harold Macmillan was the Prime Minister of the United Kingdom on May 19th, 1962.

Leave a comment and tell everyone why May 19th, 1962 is important to you.