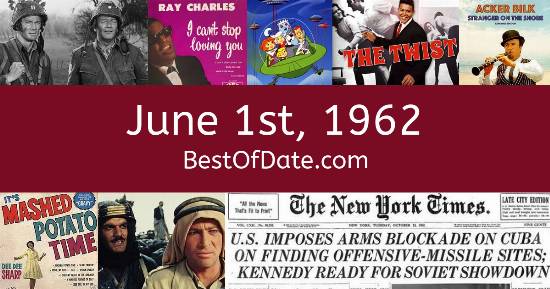 Songs that were on top of the music singles charts in the USA and the United Kingdom on June 1st, 1962.

The date is June 1st, 1962 and it's a Friday. Anyone born today will have the star sign Gemini. Currently, people have "that Friday feeling" and are looking forward to the weekend.

In Chile, the 1962 FIFA World Cup is currently taking place. On TV, people are watching popular shows such as "The Ed Sullivan Show", "Rawhide", "The Twilight Zone" and "The Andy Griffith Show". Kids and teenagers are watching TV shows such as "Dennis the Menace", "My Three Sons", "King Leonardo and His Short Subjects" and "Davey and Goliath".

If you're a kid or a teenager, then you're probably playing with toys such as Troll doll, Astrobase, Etch A Sketch and Tammy (doll).

John Fitzgerald Kennedy was the President of the United States on June 1st, 1962.

Harold Macmillan was the Prime Minister of the United Kingdom on June 1st, 1962.

Enter your date of birth below to find out how old you were on June 1st, 1962.

Here are some fun statistics about June 1st, 1962.

Leave a comment and tell everyone why June 1st, 1962 is important to you.