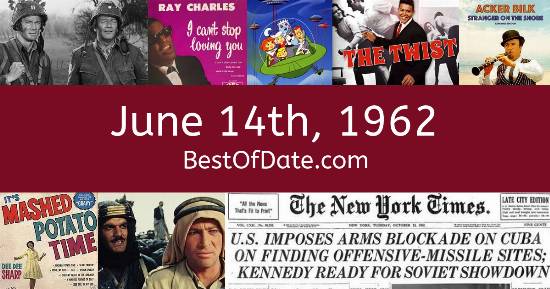 Songs that were on top of the music singles charts in the USA and the United Kingdom on June 14th, 1962.

The date is June 14th, 1962 and it's a Thursday. Anyone born today will have the star sign Gemini. It's summer, so the temperatures are warmer and the evenings are longer than usual.

In America, the song I Can't Stop Loving You by Ray Charles is on top of the singles charts. Over in the UK, Good Luck Charm by Elvis Presley is the number one hit song. John Fitzgerald Kennedy is currently the President of the United States and the movie West Side Story is at the top of the Box Office.

In Chile, the 1962 FIFA World Cup is currently taking place. If you were to travel back to this day, notable figures such as Marilyn Monroe, Robert Frost, Ernie Davis and John F. Kennedy would all be still alive. On TV, people are watching popular shows such as "The Danny Thomas Show", "Perry Mason", "The Many Loves of Dobie Gillis" and "The Andy Griffith Show".

Children and teenagers are currently watching television shows such as "The Many Loves of Dobie Gillis", "Dennis the Menace", "Davey and Goliath" and "Top Cat". If you're a kid or a teenager, then you're probably playing with toys such as the Frisbee, Astrobase, Etch A Sketch and Rock-a-Stack.

If you are looking for some childhood nostalgia, then check out June 14th, 1968 instead.

John Fitzgerald Kennedy was the President of the United States on June 14th, 1962.

Harold Macmillan was the Prime Minister of the United Kingdom on June 14th, 1962.