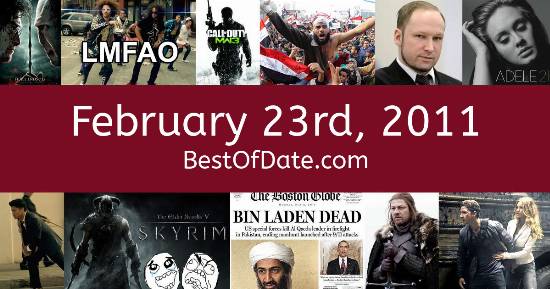 Songs that were on top of the music singles charts in the USA and the United Kingdom on February 23rd, 2011.

The date is February 23rd, 2011 and it's a Wednesday. Anyone born today will have the star sign Pisces. In America, the song Black And Yellow by Wiz Khalifa is on top of the singles charts.

Over in the UK, Someone Like You by Adele is the number one hit song. Barack Obama is currently the President of the United States and the movie Unknown is at the top of the Box Office. In the United Kingdom, David Cameron is the current Prime Minister.

A wave of demonstrations and protests have been taking place across the Middle East, in what has become known as the "Arab Spring". It's 2011, so the music charts are being dominated by artists such as Adele, Maroon 5, LMFAO, Katy Perry, Rihanna and Bruno Mars. In Ireland, the campaign for the 2011 General Election is taking place. Fianna Fail, which have been in power since 1997, are expected to perform badly because of the the economic crisis that has been gripping the country since 2008.

Anti-government protests in Libya have spread to the capital Tripoli. In the city of Benghazi, police and army members were recently forced to withdraw after being overwhelmed by protesters. Civilian death tolls have been rising over the past couple of days. 181 people have tragically lost their lives following an earthquake in the city of Christchurch, New Zealand. Search and rescue operations are currently ongoing. On TV, people are watching popular shows such as "CSI: Miami", "Extreme Makeover: Home Edition", "House" and "The Office".

Meanwhile, gamers are playing titles such as "Battlefield: Bad Company 2", "StarCraft II: Wings of Liberty", "Civilization V" and "Call of Duty: Black Ops". Kids and teenagers are watching TV shows such as "Peppa Pig", "Curious George", "Victorious" and "Jake and the Never Land Pirates". If you're a kid or a teenager, then you're probably playing with toys such as the Xbox 360, the PlayStation 3 and the iPad.

If you are looking for some childhood nostalgia, then check out February 23rd, 2017 instead.

Celebrities, historical figures and notable people who were born on the 23rd of February.

Barack Obama was the President of the United States on February 23rd, 2011.

David Cameron was the Prime Minister of the United Kingdom on February 23rd, 2011.

Enter your date of birth below to find out how old you were on February 23rd, 2011.

Here are some fun statistics about February 23rd, 2011.