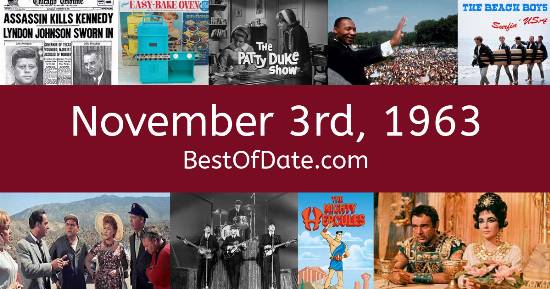 Songs that were on top of the music singles charts in the USA and the United Kingdom on November 3rd, 1963.

The movie "Cleopatra" was at the top of the Box Office on November 3rd, 1963.

The date is November 3rd, 1963, and it's a Sunday. Anyone born today will have the star sign Scorpio. Currently, people are enjoying their weekend.

Halloween has just come and passed. It's November, so the evenings are getting darker and the days are getting colder. In America, the song Sugar Shack by Jimmy Gilmer & The Fireballs is on top of the singles charts.

Over in the UK, You'll Never Walk Alone by Gerry & The Pacemakers is the number one hit song. John Fitzgerald Kennedy is currently the President of the United States, and the movie Cleopatra is at the top of the Box Office. In the United Kingdom, Sir Alec Douglas-Home is the current Prime Minister.

On TV, people are watching popular shows such as "Wagon Train", "77 Sunset Strip", "Steptoe and Son" and "The Farmer's Daughter". Kids and teenagers are watching TV shows such as "The Gumby Show", "Courageous Cat and Minute Mouse", "Top Cat" and "The Patty Duke Show". Popular toys at the moment include the likes of Tonka trucks, Troll doll, Rock-a-Stack and Tammy (doll).

These are trending news stories and fads that were prevalent at this time. These are topics that would have been in the media on November 3rd, 1963.

News stories and other events that happened around November 3rd, 1963.

Check out our personality summary for people who were born on November 3rd, 1963.

If you are looking for some childhood nostalgia, then you should check out November 3rd, 1969 instead.

American fitness model. Deceased
Born on November 3rd, 1977
He was born exactly 14 years after this date.

Model / socialite.
Born on November 3rd, 1995
She was born exactly 32 years after this date.

John Fitzgerald Kennedy was the President of the United States on November 3rd, 1963.

Sir Alec Douglas-Home was the Prime Minister of the United Kingdom on November 3rd, 1963.

Find out what your age was on November 3rd, 1963, by entering your DOB below.
This information is not saved on our server.

Here are some fun statistics about November 3rd, 1963.