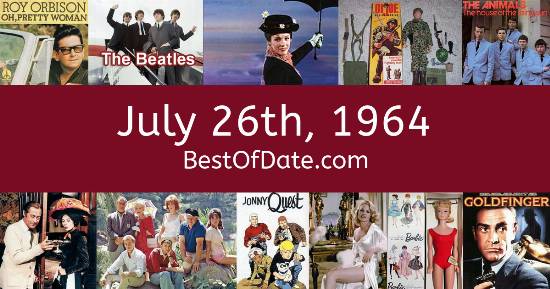 Songs that were on top of the music singles charts in the USA and the United Kingdom on July 26th, 1964.

The date is July 26th, 1964 and it's a Sunday. Anyone born today will have the star sign Leo. Currently, people are enjoying their weekend.

It's summer, so the temperatures are warmer and the evenings are longer than usual. In America, the song Rag Doll by The Four Seasons is on top of the singles charts. Over in the UK, A Hard Day's Night by The Beatles is the number one hit song.

On TV, people are watching popular shows such as "The Ed Sullivan Show", "What's My Line?", "Wagon Train" and "My Favorite Martian". Children and teenagers are currently watching television shows such as "Looney Tunes", "Lassie", "Mighty Mouse Playhouse" and "Heckle and Jeckle". Popular toys at the moment include the likes of Etch A Sketch, Ken (doll), Chatter Telephone and Big Loo.

If you are looking for some childhood nostalgia, then check out July 26th, 1970 instead.

Lyndon Baines Johnson was the President of the United States on July 26th, 1964.

Sir Alec Douglas-Home was the Prime Minister of the United Kingdom on July 26th, 1964.