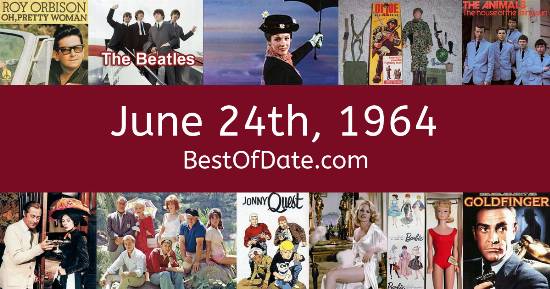 Songs that were on top of the music singles charts in the USA and the United Kingdom on June 24th, 1964.

The date is June 24th, 1964 and it's a Wednesday. Anyone born today will have the star sign Cancer. It's summer, so the temperatures are warmer and the evenings are longer than usual.

In America, the song A World Without Love by Peter & Gordon is on top of the singles charts. Over in the UK, It's Over by Roy Orbison is the number one hit song. Lyndon Baines Johnson is currently the President of the United States and the movie The Carpetbaggers is at the top of the Box Office.

If you were to travel back to this day, notable figures such as Herbert Hoover, Sam Cooke, T. S. Eliot and Winston Churchill would all be still alive. On TV, people are watching popular shows such as "What's My Line?", "The Danny Thomas Show", "Perry Mason" and "My Favorite Martian". Children and teenagers are currently watching television shows such as "Looney Tunes", "Lassie", "The Gumby Show" and "The Mighty Hercules".

If you're a kid or a teenager, then you're probably playing with toys such as Ken (doll), Big Loo, the Easy-Bake Oven and Motorific (slot car toys).

If you are looking for some childhood nostalgia, then check out June 24th, 1970 instead.

Argentine Soccer player.
Born on June 24th, 1987
He was born exactly 23 years after this date.

Internet personality.
Born on June 24th, 1998
She was born exactly 34 years after this date.

Lyndon Baines Johnson was the President of the United States on June 24th, 1964.

Sir Alec Douglas-Home was the Prime Minister of the United Kingdom on June 24th, 1964.