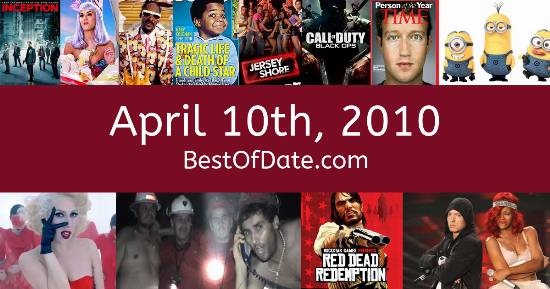 Songs that were on top of the music singles charts in the USA and the United Kingdom on April 10th, 2010.

The date is April 10th, 2010 and it's a Saturday. Anyone born today will have the star sign Aries. Currently, people are enjoying their weekend.

The summer of 2010 is drawing closer and temperatures have started to rise. In America, the song Rude Boy by Rihanna is on top of the singles charts. Over in the UK, This Ain't A Love Song by Scouting for Girls is the number one hit song.

Barack Obama is currently the President of the United States and the movie Clash of the Titans is at the top of the Box Office. In the United Kingdom, Gordon Brown is the current Prime Minister. The term "hipster" is currently growing in use. The word is being used to describe people who are pretentious and deliberately anti-mainstream.

The slang phrase "Come at me bro" is starting to become popular on the Internet. French DJ David Guetta has released a new single called "Memories", featuring rapper Kid Cudi. Wrestling fans are in mourning following reports that Chris Kanyon has committed suicide.

In technology, a new tablet computer called the iPad has recently been released by Apple. Wikileaks has released leaked footage from a 2007 airstrike in Baghdad. The video, which is titled "Collateral Murder", shows two US helicopters firing on a group of civilian men - two of which were Reuters journalists. The music video for the Insane Clown Posse song "Miracles" has become a source of amusement because of the lyrics "F**king magnets, how do they work?"

In Internet news, AOL have recently announced that social network Bebo will either be sold or shut down completely. Like MySpace, Bebo has struggled to compete with the rise in popularity of Facebook. An aircraft belonging to the Polish Air Force has crashed near the Russian city of Smolensk. 96 people have died in the disaster, including the President of Poland, Lech Kaczyński. On TV, people are watching popular shows such as "CSI: Miami", "Lost", "Prison Break" and "Sons of Anarchy".

Meanwhile, gamers are playing titles such as "Minecraft", "Farmville", "Left 4 Dead 2" and "Heavy Rain". Kids and teenagers are watching TV shows such as "LazyTown", "Mickey Mouse Clubhouse", "Big Time Rush" and "Good Luck Charlie". Popular toys at the moment include the likes of the Xbox 360, the PlayStation 3, ZhuZhu Pets and the iPad.

If you are looking for some childhood nostalgia, then check out April 10th, 2016 instead.

Barack Obama was the President of the United States on April 10th, 2010.

Gordon Brown was the Prime Minister of the United Kingdom on April 10th, 2010.

Enter your date of birth below to find out how old you were on April 10th, 2010.