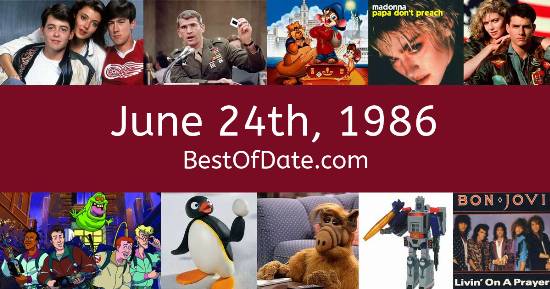 Songs that were on top of the music singles charts in the USA and the United Kingdom on June 24th, 1986.

The date is June 24th, 1986 and it's a Tuesday. Anyone born today will have the star sign Cancer. It's summer, so the temperatures are warmer and the evenings are longer than usual.

In America, the song On My Own by Patti LaBelle & Michael McDonald is on top of the singles charts. Over in the UK, The Edge Of Heaven by Wham is the number one hit song. Ronald Reagan is currently the President of the United States and the movie Back to School is at the top of the Box Office.

Currently, the 1986 FIFA World Cup is taking place in Mexico. If you were to travel back to this day, notable figures such as Cliff Burton, Gia Carangi, Liberace and Andy Warhol would all be still alive. On TV, people are watching popular shows such as "Knight Rider", "Cheers", "The Cosby Show" and "Miami Vice".

Meanwhile, gamers are playing titles such as "Space Invaders", "Mario Bros.", "Ultima IV: Quest of the Avatar" and "The Legend of Zelda". Kids and teenagers are watching TV shows such as "The Bugs Bunny Show", "He-Man and the Masters of the Universe", "Heathcliff & the Catillac Cats" and "She-Ra: Princess of Power". If you're a kid or a teenager, then you're probably playing with toys such as Speak & Spell, Monchhichi / Chicaboo, the Commodore 64 and the Nintendo Entertainment System.

If you are looking for some childhood nostalgia, then check out June 24th, 1992 instead.

Argentine Soccer player.
Born on June 24th, 1987
He was born exactly one year after this date.

Internet personality.
Born on June 24th, 1998
She was born exactly 12 years after this date.

Ronald Reagan was the President of the United States on June 24th, 1986.

Margaret Thatcher was the Prime Minister of the United Kingdom on June 24th, 1986.