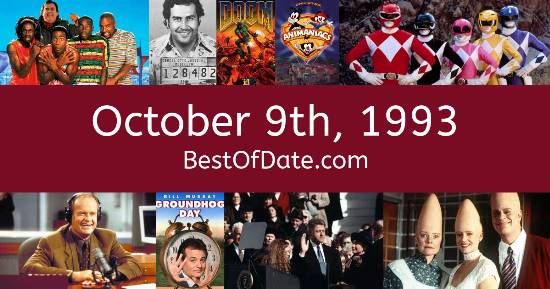 Songs that were on top of the music singles charts in the USA and the United Kingdom on October 9th, 1993.

The date is October 9th, 1993 and it's a Saturday. Anyone born today will have the star sign Libra. Currently, people are enjoying their weekend.

The summer is long gone. Temperatures have started to become much cooler and the evenings are beginning to get darker. Fallen leaves have carpeted driveways, lawns, pathways and sidewalks and there's a fresh earthy scent in the ear. In America, the song Dream Lover by Mariah Carey is on top of the singles charts.

Over in the UK, Boom Shake The Room by Jazzy Jeff & Fresh Prince is the number one hit song. Bill Clinton is currently the President of the United States and the movie Malice is at the top of the Box Office. In the United Kingdom, John Major is the current Prime Minister.

In fashion, many of the trends from the late 80s are still in vogue. Colored tights, denim overalls, leotards, flannel shirts and shoulder pads are all fashionable at the moment. Grunge fashion has also become mainstream, popularizing band t-shirts, ripped jeans, mom jeans and Doc Martens. In Europe, a war is continuing to rage on in Bosnia and Herzegovina. A playing discs game called "Pogs" is currently spreading in popularity throughout the world.

In Mogadishu, Somalia, a battle between US forces and militiamen loyal to warlord Mohamed Farrah Aidid has resulted in the deaths of 19 American soldiers. In Russia, the army has stormed the parliament building in Moscow on the orders of President Boris Yeltsin. This follows a constitutional crisis that began last month after Yeltsin attempted to dissolve the Supreme Soviet. In basketball news, Chicago Bulls star Michael Jordan has just announced that he will be retiring from the NBA.

Meanwhile, a new sci-fi movie called Demolition Man, starring Wesley Snipes and Sylvester Stallone, has recently been released in movie theaters. On TV, people are watching popular shows such as "One Foot in the Grave", "Clarissa Explains It All", "Batman: The Animated Series" and "Star Trek: Deep Space Nine". Meanwhile, gamers are playing titles such as "Night Trap", "Final Fantasy V", "Syndicate" and "Myst".

Children and teenagers are currently watching television shows such as "Thomas the Tank Engine", "Beverly Hills, 90210", "Are You Afraid of the Dark?" and "Animaniacs". Popular toys at the moment include the likes of Jenga, Polly Pocket, Yo-yo and the Super Nintendo Entertainment System (SNES).

Celebrities, historical figures and notable people who were born on the 9th of October.

Bill Clinton was the President of the United States on October 9th, 1993.

John Major was the Prime Minister of the United Kingdom on October 9th, 1993.

Enter your date of birth below to find out how old you were on October 9th, 1993.

Here are some fun statistics about October 9th, 1993.

Leave a comment and tell everyone why October 9th, 1993 is important to you.