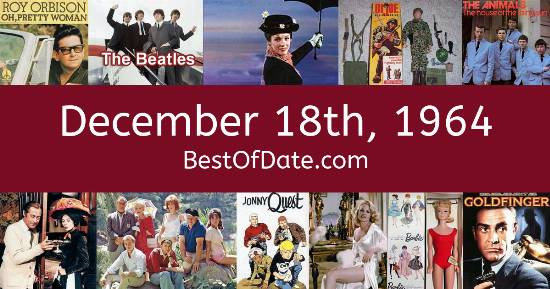 These songs were on top of the music charts in the United States and the United Kingdom on December 18th, 1964.

The movie "My Fair Lady" was at the top of the Box Office on this day.

The date is December 18th, 1964, and it's a Friday. Anyone born today will have the star sign Sagittarius. Currently, people have "that Friday feeling" and are looking forward to the weekend.

The Christmas season of 1964 is in full swing. People are putting up their decorations and festive songs are playing on the radio. In America, the song Come See About Me by The Supremes is on top of the singles charts. Over in the UK, I Feel Fine by The Beatles is the number one hit song.

Lyndon Baines Johnson is currently the President of the United States, and the movie My Fair Lady is at the top of the Box Office. In the United Kingdom, Harold Wilson is the current Prime Minister. Because it's 1964, radio stations are playing hit songs from music artists such as The Beatles, Roy Orbison, The Animals, The Supremes and The Beach Boys.

In fashion, women are wearing miniskirts and "space age" attire with synthetic materials. The "Dolly Girl" look has also become popular. Meanwhile, men are beginning to transition into "surf rock" fashion, which has been made popular by bands such as The Beach Boys. "Greasers", who are influenced by rock 'n' roll fashion, have also become a popular subculture. If you were to travel back to this day, notable figures such as T. S. Eliot, Winston Churchill, Nat King Cole and Malcolm X would all be still alive. On TV, people are watching popular shows such as "What's My Line?", "The Jack Benny Program", "Perry Mason" and "The Farmer's Daughter".

Kids and teenagers are watching TV shows such as "Tom and Jerry", "Captain Kangaroo", "Noggin the Nog" and "Top Cat". Popular toys at the moment include the likes of Tonka trucks, Tammy (doll), the Easy-Bake Oven and Johnny Seven OMA (toy gun).

These are trending news stories and fads that were prevalent at this time. These are topics that would have been in the media on December 18th, 1964.

Check out our personality summary for people who were born on December 18th, 1964.

Television shows that people were watching in December, 1964.

If you are looking for some childhood nostalgia, then you should check out December 18th, 1970 instead.

Rapper. Deceased
Born on December 18th, 1970
He was born exactly 6 years after this date.

Fitness model / wrestler.
Born on December 18th, 1975
She was born exactly 11 years after this date.

Lyndon Baines Johnson was the President of the United States on December 18th, 1964.

Harold Wilson was the Prime Minister of the United Kingdom on December 18th, 1964.

Enter your date of birth below to find out how old you were on December 18th, 1964.
This information is not transmitted to our server.

Here are some fun statistics about December 18th, 1964.