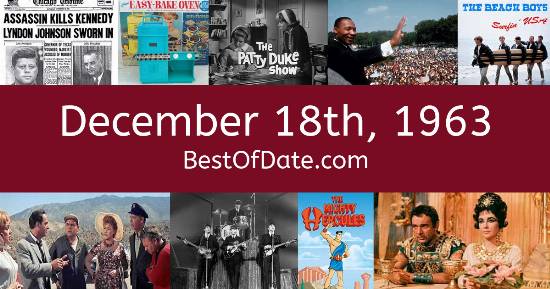 These songs were on top of the music charts in the United States and the United Kingdom on December 18th, 1963.

The movie "Under the Yum Yum Tree" was at the top of the Box Office on this day.

The date is December 18th, 1963, and it's a Wednesday. Anyone born today will have the star sign Sagittarius. The Christmas season of 1963 is in full swing. People are putting up their decorations and festive songs are playing on the radio.

In America, the song Dominique by The Singing Nun is on top of the singles charts. Over in the UK, I Want To Hold Your Hand by The Beatles is the number one hit song. Lyndon Baines Johnson is currently the President of the United States, and the movie Under the Yum Yum Tree is at the top of the Box Office.

If you were to travel back to this day, notable figures such as Herbert Hoover and Sam Cooke would be still alive. On TV, people are watching popular shows such as "The Danny Thomas Show", "Bonanza", "Danger Man" and "Route 66". Children and teenagers are currently watching television shows such as "Captain Kangaroo", "The Gumby Show", "Dennis the Menace" and "The Patty Duke Show".

If you're a kid or a teenager, then you're probably playing with toys such as BAS-KET Miniature Basketball, Playpal dolls, Etch A Sketch and Chatter Telephone.

These are trending news stories and fads that were prevalent at this time. These are topics that would have been in the media on December 18th, 1963.

Check out our personality summary for people who were born on December 18th, 1963.

Television shows that people were watching in December, 1963.

If you are looking for some childhood nostalgia, then you should check out December 18th, 1969 instead.

Wrestler.
Born on December 18th, 1964
He was born exactly one year after this date.

Rapper. Deceased
Born on December 18th, 1970
He was born exactly 7 years after this date.

Fitness model / wrestler.
Born on December 18th, 1975
She was born exactly 12 years after this date.

Lyndon Baines Johnson was the President of the United States on December 18th, 1963.

Sir Alec Douglas-Home was the Prime Minister of the United Kingdom on December 18th, 1963.

Enter your date of birth below to find out how old you were on December 18th, 1963.
This information is not transmitted to our server.

Here are some fun statistics about December 18th, 1963.