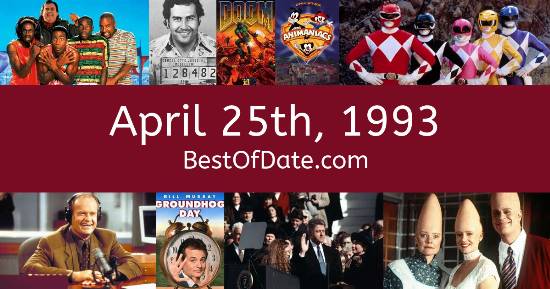 On April 25th, 1993, the following songs were at the top of the music charts in the USA and the UK.

The top "Box Office" movie on this date was the film "Cop and a Half".

The date is April 25th, 1993, and it's a Sunday. Anyone born today will have the star sign Taurus. Currently, people are enjoying their weekend.

The summer of 1993 is drawing closer and temperatures have started to rise. In America, the song Informer by Snow is on top of the singles charts. Over in the UK, Young At Heart by Bluebells is the number one hit song.

Bill Clinton is currently the President of the United States, and the movie Cop and a Half is at the top of the Box Office. In the United Kingdom, John Major is the current Prime Minister. Texting is not a thing yet. Instead, people are using landline phones and pagers. Furthermore, the vast majority of people still have no idea what "the Internet" is.

A siege between law enforcement and cult members at a compound near Waco, Texas, has ended with the loss of 76 lives. The siege had lasted for over 50 days. Live news footage of the scene showed that one of the buildings caught on fire during an assault by the FBI. In the NFL, quarterback Joe Montana has been traded to the Kansas City Chiefs. In soccer, French side Marseille have won the 1993 UEFA Champions League after defeating Italian side A.C. Milan 1-0. A 43rd minute goal from defender Basile Boli was enough to decide the game.

If you were to travel back to this day, notable figures such as Conway Twitty, Dražen Petrović, Pat Nixon and Reggie Lewis would all be still alive. On TV, people are watching popular shows such as "Married... with Children", "Full House", "Dinosaurs" and "Baywatch". Meanwhile, gamers are playing titles such as "Street Fighter II: The World Warrior", "Night Trap", "Super Star Wars" and "X-Men".

Kids and teenagers are watching TV shows such as "Teenage Mutant Ninja Turtles", "Blossom", "Rosie and Jim" and "Batman: The Animated Series". If you're a kid or a teenager, then you're probably playing with toys such as the Easy-Bake Oven, Pogo ball / Lolo ball, the Ghostbusters Proton Pack and Pogs / Milkcaps.

These are trending news stories and fads that were prevalent at this time. These are topics that would have been in the media on April 25th, 1993.

News stories and other events that happened around April 25th, 1993.

Check out our personality summary for people who were born on April 25th, 1993.

Television shows that people were watching in April, 1993.

Popular video games that people were playing in April of 1993.

If you are looking for some childhood nostalgia, then you should check out April 25th, 1999 instead.

Bill Clinton was the President of the United States on April 25th, 1993.

John Major was the Prime Minister of the United Kingdom on April 25th, 1993.

Find out what your age was on April 25th, 1993, by entering your DOB below.
This information is not saved on our server.