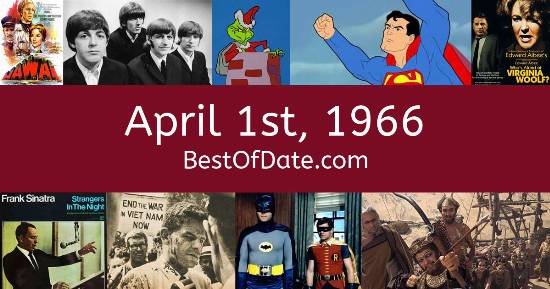 Songs that were on top of the music singles charts in the USA and the United Kingdom on April 1st, 1966.

The date is April 1st, 1966, and it's a Friday. Anyone born today will have the star sign Aries. Currently, people have "that Friday feeling" and are looking forward to the weekend.

It is April Fool's Day, which means that people are playing practical jokes on one another. The summer of 1966 is drawing closer and temperatures have started to rise. In America, the song The Ballad Of The Green Berets by Sgt. Barry Sadler is on top of the singles charts.

Over in the UK, The Sun Ain't Gonna Shine Anymore by The Walker Brothers is the number one hit song. Lyndon Baines Johnson is currently the President of the United States, and the movie The Sound of Music is at the top of the Box Office. In the United Kingdom, Harold Wilson is the current Prime Minister.

On TV, people are watching popular shows such as "What's My Line?", "Perry Mason", "Hullabaloo" and "Where the Action Is". Kids and teenagers are watching TV shows such as "My Three Sons", "The Bugs Bunny Show", "Top Cat" and "Atom Ant". Popular toys at the moment include the likes of Tonka trucks, the Easy-Bake Oven, Barrel of Monkeys and Suzy Homemaker.

These are trending news stories and fads that were prevalent at this time. These are topics that would have been in the media on April 1st, 1966.

News stories and other events that happened around April 1st, 1966.

Check out our personality summary for people who were born on April 1st, 1966.

Television shows that people were watching in April, 1966.

If you are looking for some childhood nostalgia, then you should check out April 1st, 1972 instead.

Lyndon Baines Johnson was the President of the United States on April 1st, 1966.

Harold Wilson was the Prime Minister of the United Kingdom on April 1st, 1966.

Find out what your age was on April 1st, 1966, by entering your DOB below.
This information is not saved on our server.

Here are some fun statistics about April 1st, 1966.