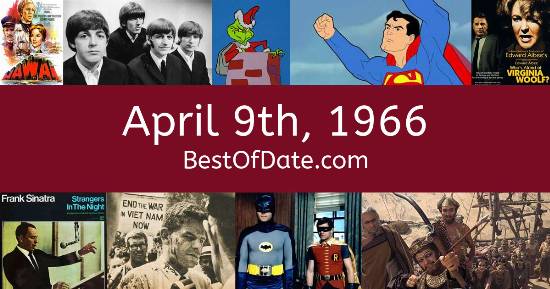 Songs that were on top of the music singles charts in the USA and the United Kingdom on April 9th, 1966.

The date is April 9th, 1966 and it's a Saturday. Anyone born today will have the star sign Aries. Currently, people are enjoying their weekend.

The summer of 1966 is drawing closer and temperatures have started to rise. In America, the song The Ballad Of The Green Berets by Sgt. Barry Sadler is on top of the singles charts. Over in the UK, The Sun Ain't Gonna Shine Anymore by The Walker Brothers is the number one hit song.

On TV, people are watching popular shows such as "Danger Man", "Hullabaloo", "Where the Action Is" and "I Dream of Jeannie". Kids and teenagers are watching TV shows such as "Looney Tunes", "Tom and Jerry", "My Three Sons" and "Ricochet Rabbit & Droop-a-Long". Popular toys at the moment include the likes of Ken (doll), G.I. Joe: America's Movable Fighting Man, Motorific (slot car toys) and Barrel of Monkeys.

If you are looking for some childhood nostalgia, then check out April 9th, 1972 instead.

Lyndon Baines Johnson was the President of the United States on April 9th, 1966.

Harold Wilson was the Prime Minister of the United Kingdom on April 9th, 1966.

Enter your date of birth below to find out how old you were on April 9th, 1966.

Here are some fun statistics about April 9th, 1966.