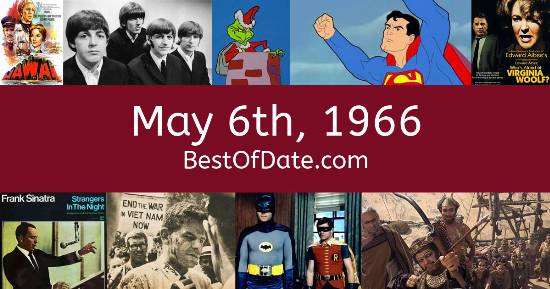 Songs that were on top of the music singles charts in the USA and the United Kingdom on May 6th, 1966.

The date is May 6th, 1966 and it's a Friday. Anyone born today will have the star sign Taurus. Currently, people have "that Friday feeling" and are looking forward to the weekend.

The summer of 1966 has finally arrived. The weather has warmed up and the evenings are brighter than usual. In America, the song Good Lovin' by Young Rascals is on top of the singles charts. Over in the UK, You Don't Have To Say You Love Me by Dusty Springfield is the number one hit song.

On TV, people are watching popular shows such as "Gunsmoke", "Perry Mason", "Danger Man" and "Gilligan's Island". Children and teenagers are currently watching television shows such as "Lassie", "The Gumby Show", "Atom Ant" and "Milton the Monster". If you're a kid or a teenager, then you're probably playing with toys such as Ken (doll), G.I. Joe: America's Movable Fighting Man, Captain Action (action figure) and Major Matt Mason (action figure).

Notable events that occurred around May 6th, 1966.

Lyndon Baines Johnson was the President of the United States on May 6th, 1966.

Harold Wilson was the Prime Minister of the United Kingdom on May 6th, 1966.

Enter your date of birth below to find out how old you were on May 6th, 1966.

Leave a comment and tell everyone why May 6th, 1966 is important to you.