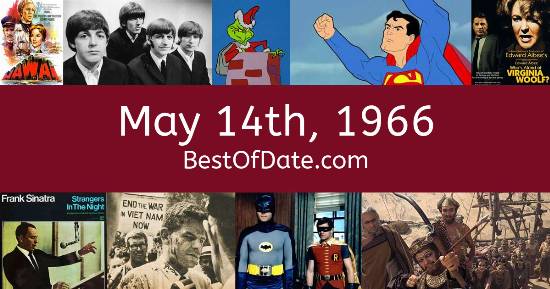 Songs that were on top of the music singles charts in the USA and the United Kingdom on May 14th, 1966.

The date is May 14th, 1966 and it's a Saturday. Anyone born today will have the star sign Taurus. Currently, people are enjoying their weekend.

The summer of 1966 has finally arrived. The weather has warmed up and the evenings are brighter than usual. In America, the song Monday Monday by The Mama's & The Papa's is on top of the singles charts. Over in the UK, Pretty Flamingo by Manfred Mann is the number one hit song.

Lyndon Baines Johnson is currently the President of the United States and the movie The Sound of Music is at the top of the Box Office. In the United Kingdom, Harold Wilson is the current Prime Minister. Because it is 1966, radio stations are playing hit songs from music artists such as Frank Sinatra, The Beatles, The Beach Boys, SSgt Barry Sadler, The Association and The Supremes.

In fashion, a new "hippie subculture" has emerged, bringing with it laid back Bohemian styles. Frayed bell-bottomed jeans, Jesus sandals, crushed velvet suits and bright tie-dye t-shirts are all popular items of clothing at the moment. If you were to travel back to this day, notable figures such as Walt Disney, Che Guevara and Otis Redding would all be still alive. On TV, people are watching popular shows such as "What's My Line?", "Bonanza", "Danger Man" and "Hullabaloo".

Children and teenagers are currently watching television shows such as "Captain Kangaroo", "Top Cat", "The Mighty Hercules" and "Ricochet Rabbit & Droop-a-Long". Popular toys at the moment include the likes of Barbie, Troll doll, Army men and Operation.

Notable events that occurred around May 14th, 1966.

If you are looking for some childhood nostalgia, then check out May 14th, 1972 instead.

Internet personality.
Born on May 14th, 1996
She was born exactly 30 years after this date.

Lyndon Baines Johnson was the President of the United States on May 14th, 1966.

Harold Wilson was the Prime Minister of the United Kingdom on May 14th, 1966.