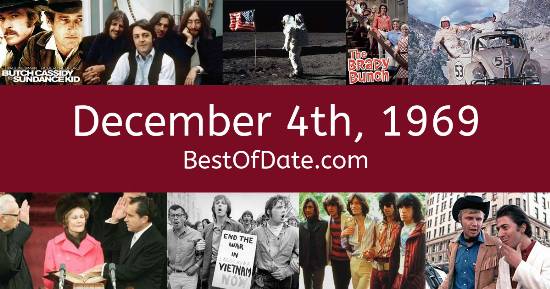 Songs that were on top of the music singles charts in the USA and the United Kingdom on December 4th, 1969.

The movie "Krakatoa, East of Java" was at the top of the box office on December 4th, 1969.

The date is December 4th, 1969 and it's a Thursday. Anyone born today will have the star sign Sagittarius. The Christmas season of 1969 has began.

In America, the song Na Na Hey Hey Kiss Him Goodbye by Steam is on top of the singles charts. Over in the UK, Sugar Sugar by Archies is the number one hit song. Richard Nixon is currently the President of the United States and the movie Krakatoa, East of Java is at the top of the Box Office.

If you were to travel back to this day, notable figures such as Tammi Terrell, Jimi Hendrix, Janis Joplin and Charles de Gaulle would all be still alive. On TV, people are watching popular shows such as "Rowan & Martin's Laugh-In", "Columbo", "Hawaii Five-O" and "The Courtship of Eddie's Father". Children and teenagers are currently watching television shows such as "The Bugs Bunny Show", "Underdog", "Star Trek: The Original Series" and "Scooby-Doo, Where Are You!".

Popular toys at the moment include the likes of Matchbox toy cars, Army men, Battleship (game) and Crissy (doll).

If you are looking for some childhood nostalgia, then check out December 4th, 1975 instead.

Model.
Born on December 4th, 1973
She was born exactly 4 years after this date.

BTS member.
Born on December 4th, 1992
He was born exactly 23 years after this date.

Love Island contestant.
Born on December 4th, 1996
She was born exactly 27 years after this date.

Richard Nixon was the President of the United States on December 4th, 1969.

Harold Wilson was the Prime Minister of the United Kingdom on December 4th, 1969.

Enter your date of birth below to find out how old you were on December 4th, 1969.

Here are some fun statistics about December 4th, 1969.

Have something to say about December 4th, 1969?