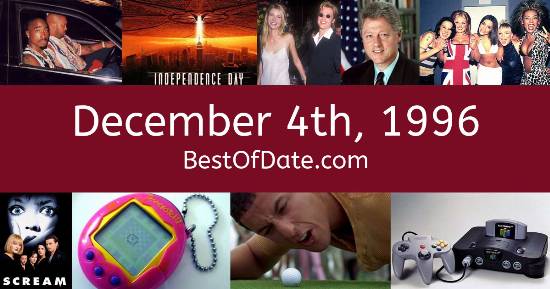 Songs that were on top of the music singles charts in the USA and the United Kingdom on December 4th, 1996.

The movie "Star Trek: First Contact" was at the top of the Box Office on December 4th, 1996.

The date is December 4th, 1996, and it's a Wednesday. Anyone born today will have the star sign Sagittarius. The Christmas season of 1996 has began.

In America, the song Un-break My Heart by Toni Braxton is on top of the singles charts. Over in the UK, I Feel You by Peter Andre is the number one hit song. Bill Clinton is currently the President of the United States, and the movie Star Trek: First Contact is at the top of the Box Office.

A new dance craze called the "Macarena" is all the rage at the moment. A new video game console called the "Nintendo 64" has just been released. It is currently competing against the Sony PlayStation and the Sega Saturn. If you were to travel back to this day, notable figures such as Carl Sagan, JonBenét Ramsey, The Notorious B.I.G and Gianni Versace would all be still alive.

On TV, people are watching popular shows such as "Roseanne", "Step by Step", "Martin" and "Star Trek: Voyager". Meanwhile, gamers are playing titles such as "Mortal Kombat 3", "Phantasmagoria", "Twisted Metal" and "Blood Omen: Legacy of Kain". Kids and teenagers are watching TV shows such as "Tales from the Cryptkeeper", "Johnny Bravo", "7th Heaven" and "Richie Rich".

Popular toys at the moment include the likes of Jenga, Action Man, Dear Diary and the PlayStation (PS1).

These are trending news stories and fads that were prevalent at this time. These are topics that would have been in the media on December 4th, 1996.

Check out our personality summary for people who were born on December 4th, 1996.

Television shows that people were watching in December, 1996.

Popular video games that people were playing in December of 1996.

If you are looking for some childhood nostalgia, then you should check out December 4th, 2002, instead.

Celebrities, historical figures, and other notable people who were born on December 4th.

Bill Clinton was the President of the United States on December 4th, 1996.

Enter your date of birth below to find out how old you were on December 4th, 1996.
This information is not transmitted to our server.

Here are some fun statistics about December 4th, 1996.