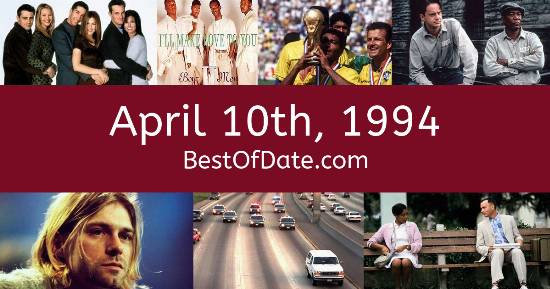 Songs that were on top of the music singles charts in the USA and the United Kingdom on April 10th, 1994.

The date is April 10th, 1994 and it's a Sunday. Anyone born today will have the star sign Aries. Currently, people are enjoying their weekend.

The summer of 1994 is drawing closer and temperatures have started to rise. In America, the song The Sign by Ace of Base is on top of the singles charts. Over in the UK, Doop by Doop is the number one hit song.

Bill Clinton is currently the President of the United States and the movie D2: The Mighty Ducks is at the top of the Box Office. In the United Kingdom, John Major is the current Prime Minister. Meanwhile, in technology news, a relatively new storage format called the CD is beginning to outpace the regular cassette tape in music sales. The disc-based format gives listeners the ability to skip between songs instead of having to manually rewind and forward.

On the continent of Africa, a horrible event is unfolding, as the Hutu majority in Rwanda attempt to wipe out the Tutsi minority. This genocide began following the assassination of President Juvenal Habyarimana. Meanwhile, in celebrity news, "Beverly Hills, 90210" actress Shannen Doherty has filed for divorce from actor Ashley Hamilton after less than a year of marriage. People are currently shocked by the news that Nirvana lead singer Kurt Cobain has been found dead at his home in Lake Washington, Seattle. His death has been declared a suicide. It is believed that Cobain may have been dead for a couple of days before his body was discovered.

If you were to travel back to this day, notable figures such as Richard Nixon, Nicole Brown Simpson, Andrés Escobar and Raul Julia would all be still alive. On TV, people are watching popular shows such as "Married... with Children", "Full House", "Teenage Mutant Ninja Turtles" and "Batman: The Animated Series". Meanwhile, gamers are playing titles such as "Mortal Kombat II", "Gunstar Heroes", "Myst" and "NBA Jam".

Children and teenagers are currently watching television shows such as "Garfield and Friends", "Rugrats", "Bill Nye the Science Guy" and "Animaniacs". Popular toys at the moment include the likes of Micro Machines, Jenga, Lego Pirates and Nerf Blaster.

If you are looking for some childhood nostalgia, then check out April 10th, 2000 instead.

Bill Clinton was the President of the United States on April 10th, 1994.

John Major was the Prime Minister of the United Kingdom on April 10th, 1994.

Enter your date of birth below to find out how old you were on April 10th, 1994.