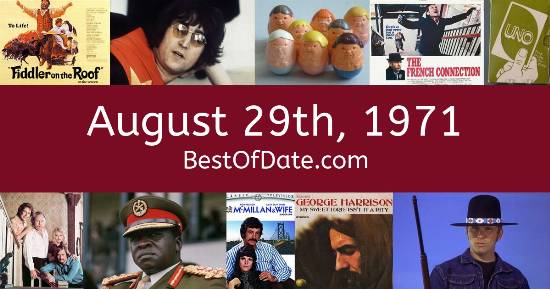 On August 29th, 1971, the following songs were at the top of the music charts in the USA and the UK.

The top "Box Office" movie on this date was the film "The Anderson Tapes".

The date is August 29th, 1971, and it's a Sunday. Anyone born today will have the star sign Virgo. Currently, people are enjoying their weekend.

The summer of 1971 is coming to an end and fall is just around the corner. In America, the song How Can You Mend A Broken Heart by The Bee Gees is on top of the singles charts. Over in the UK, I'm Still Waiting by Diana Ross is the number one hit song.

Richard Nixon is currently the President of the United States, and the movie The Anderson Tapes is at the top of the Box Office. In the United Kingdom, Edward Heath is the current Prime Minister. In fashion, the hippie look from the 1960s is still popular. Clothing items such as tie dye shirts, bell-bottoms, midi skirts, gauchos and Mexican blouses are being worn by women. Meanwhile, men are wearing dark satin shirts, ethnic-looking tunics, bell bottom jeans, tweed sports jackets and turtlenecks.

It's 1971, so radio stations are playing songs from artists such as George Harrison, John Lennon, Rod Stewart, Lynn Anderson, The Rolling Stones, Three Dog Night, Carole King and The Osmonds. If you were to travel back to this day, notable figures such as J. Edgar Hoover, Jackie Robinson and Harry S. Truman would all be still alive. On TV, people are watching popular shows such as "What's My Line?", "Hawaii Five-O", "Here's Lucy" and "Medical Center".

Children and teenagers are currently watching television shows such as "The Banana Splits", "Cattanooga Cats", "The Brady Bunch" and "Sesame Street". Popular toys at the moment include the likes of Rock 'Em Sock 'Em Robots, Motorific (slot car toys), Suzy Homemaker and Clackers.

These are trending news stories and fads that were prevalent at this time. These are topics that would have been in the media on August 29th, 1971.

News stories and other events that happened around August 29th, 1971.

Check out our personality summary for people who were born on August 29th, 1971.

Television shows that people were watching in August, 1971.

If you are looking for some childhood nostalgia, then you should check out August 29th, 1977 instead.

German football manager.
Born on August 29th, 1973
He was born exactly 2 years after this date.

Youtube personality.
Born on August 29th, 1993
He was born exactly 22 years after this date.

Richard Nixon was the President of the United States on August 29th, 1971.

Edward Heath was the Prime Minister of the United Kingdom on August 29th, 1971.

Find out what your age was on August 29th, 1971, by entering your DOB below.
This information is not saved on our server.