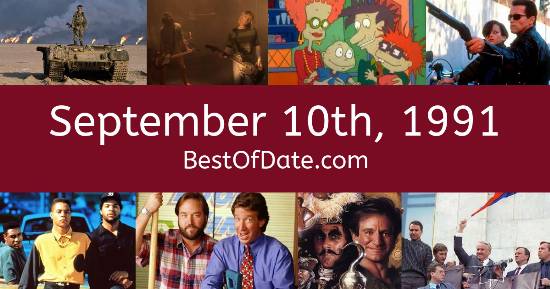 Songs that were on top of the music singles charts in the USA and the United Kingdom on September 10th, 1991:

The date is September 10th, 1991 and it's a Tuesday. Anyone born today will have the star sign Virgo. Schools have started back and autumn has arrived, so temperatures have started to cool and trees are beginning to shed their leaves.

In America, the song The Promise Of A New Day by Paula Abdul is on top of the singles charts. Over in the UK, (Everything I Do) I Do It For You by Bryan Adams is the number one hit song. George W. Bush Snr. is currently the President of the United States and the movie Dead Again is at the top of the Box Office.

It's 1991, so the airwaves are being dominated by artists such as Bryan Adams, Michael Jackson, Roxette, R.E.M., Color Me Badd and Paula Abdul. A rock subgenre called "Grunge" is starting to rise in popularity. In the United States, a recent fire at the Imperial Foods plant in Hamlet, North Carolina has tragically claimed the lives of 25 people.

In music, the song "Losing My Religion" by R.E.M. has just won the "Video of the Year" award at the 1991 MTV Video Music Awards. In celebrity news, John Travolta has just married actress Kelly Preston. In Europe, the Soviet Union is continuing to dissolve.

Meanwhile, the country of Yugoslavia is continuing to break up following Macedonia's recent decision to declare its independence. Nirvana have just released their single "Smells Like Teen Spirit". On TV, people are watching popular shows such as "Knots Landing", "Cheers", "Who's the Boss?" and "The Wonder Years".

Meanwhile, gamers are playing titles such as "Duck Hunt", "SimCity", "Railroad Tycoon" and "Battletoads". Children and teenagers are currently watching television shows such as "Mister Rogers' Neighborhood", "Count Duckula", "Rosie and Jim" and "The Fresh Prince of Bel-Air". If you're a kid or a teenager, then you're probably playing with toys such as "Easy-Bake Oven", "Micro Machines", "Game Boy" and "Yo-yo".

Celebrities, historical figures and noteable people who were born on the 10th of September:

Who was the Prime Minister of the United Kingdom on September 10th, 1991?

Enter your date of birth below to find out how old you were on September 10th, 1991.

Looking for some nostalgia? Here are some Youtube videos relating to September 10th, 1991. Please note that videos are automatically selected by Youtube and that results may vary! Click on the "Load Next Video" button to view the next video in the search playlist. In many cases, you'll find episodes of old TV shows, documentaries, music videos and soap dramas.

Here are some fun statistics about September 10th, 1991.