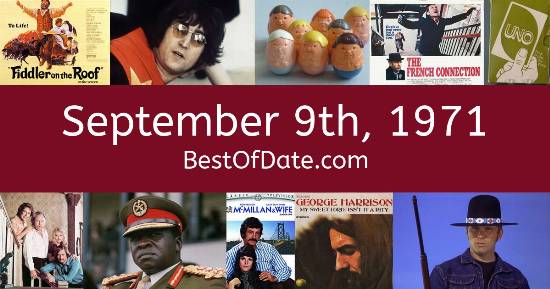 Songs that were on top of the music singles charts in the USA and the United Kingdom on September 9th, 1971.

The movie "Sweet Sweetback's Baadasssss Song" was at the top of the box office on September 9th, 1971.

The date is September 9th, 1971 and it's a Thursday. Anyone born today will have the star sign Virgo. Schools have started back and autumn has arrived, so temperatures have started to cool and trees are beginning to shed their leaves.

In America, the song Uncle Albert Admiral Halsey by Paul & Linda McCartney is on top of the singles charts. Over in the UK, I'm Still Waiting by Diana Ross is the number one hit song. Richard Nixon is currently the President of the United States and the movie Sweet Sweetback's Baadasssss Song is at the top of the Box Office.

If you were to travel back to this day, notable figures such as J. Edgar Hoover, Jackie Robinson and Harry S. Truman would all be still alive. On TV, people are watching popular shows such as "What's My Line?", "Rowan & Martin's Laugh-In", "Here's Lucy" and "The Courtship of Eddie's Father". Children and teenagers are currently watching television shows such as "Captain Kangaroo", "The Bugs Bunny Show", "Cattanooga Cats" and "All in the Family".

Popular toys at the moment include the likes of Motorific (slot car toys), Crissy (doll), Frisbee and VertiBird (toy helicopter).

If you are looking for some childhood nostalgia, then check out September 9th, 1977 instead.

Singer.
Born on September 9th, 1975
He was born exactly 4 years after this date.

Actress.
Born on September 9th, 1980
She was born exactly 9 years after this date.

Soccer player.
Born on September 9th, 1985
He was born exactly 14 years after this date.

UFC fighter.
Born on September 9th, 1986
He was born exactly 15 years after this date.

Richard Nixon was the President of the United States on September 9th, 1971.

Edward Heath was the Prime Minister of the United Kingdom on September 9th, 1971.

Enter your date of birth below to find out how old you were on September 9th, 1971.

Here are some fun statistics about September 9th, 1971.

Have something to say about September 9th, 1971?