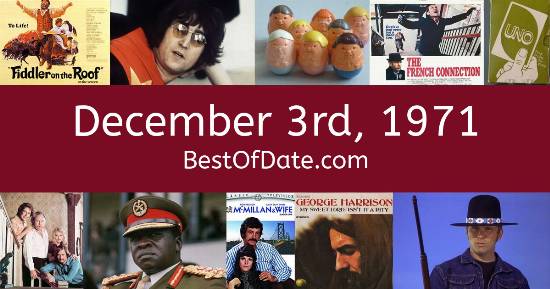 Songs that were on top of the music singles charts in the USA and the United Kingdom on December 3rd, 1971.

The movie "The French Connection" was at the top of the box office on December 3rd, 1971.

The date is December 3rd, 1971 and it's a Friday. Anyone born today will have the star sign Sagittarius. Currently, people have "that Friday feeling" and are looking forward to the weekend.

The Christmas season of 1971 has began. In America, the song Theme From Shaft by Isaac Hayes is on top of the singles charts. Over in the UK, Coz I Luv You by Slade is the number one hit song.

It's 1971, so radio stations are playing songs from artists such as George Harrison, John Lennon, Rod Stewart, Lynn Anderson, The Rolling Stones, Three Dog Night, Carole King and The Osmonds. If you were to travel back to this day, notable figures such as J. Edgar Hoover, Jackie Robinson and Harry S. Truman would all be still alive. On TV, people are watching popular shows such as "Gunsmoke", "Columbo", "The Flip Wilson Show" and "The Mary Tyler Moore Show".

Kids and teenagers are watching TV shows such as "Lassie", "The Pink Panther Show", "Josie and the Pussycats" and "Sabrina the Teenage Witch". Popular toys at the moment include the likes of Etch A Sketch, Suzy Homemaker, Crissy (doll) and VertiBird (toy helicopter).

If you are looking for some childhood nostalgia, then check out December 3rd, 1977 instead.

Soccer player.
Born on December 3rd, 1981
He was born exactly 10 years after this date.

Former soccer player.
Born on December 3rd, 1982
He was born exactly 11 years after this date.

Rapper.
Born on December 3rd, 1994
He was born exactly 23 years after this date.

Richard Nixon was the President of the United States on December 3rd, 1971.

Edward Heath was the Prime Minister of the United Kingdom on December 3rd, 1971.

Enter your date of birth below to find out how old you were on December 3rd, 1971.

Here are some fun statistics about December 3rd, 1971.

Have something to say about December 3rd, 1971?