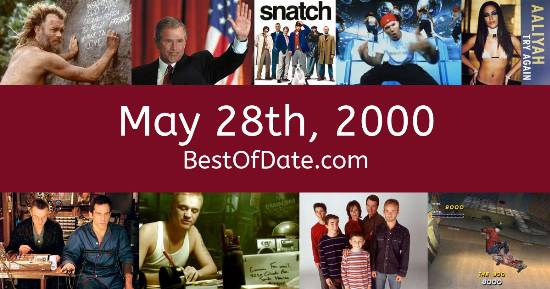 Songs that were on top of the music singles charts in the USA and the United Kingdom on May 28th, 2000.

The date is May 28th, 2000 and it's a Sunday. Anyone born today will have the star sign Gemini. Currently, people are enjoying their weekend.

The summer of 2000 has finally arrived. The weather has warmed up and the evenings are brighter than usual. In America, the song Maria Maria by Santana is on top of the singles charts. Over in the UK, Don't Call Me Baby by Madison Avenue is the number one hit song.

Bill Clinton is currently the President of the United States and the movie Dinosaur is at the top of the Box Office. In the United Kingdom, Tony Blair is the current Prime Minister. A relatively new form of communication called "text messaging" is continuing to explode in popularity. Although the technology has been around since the mid-1990s, it was only recently that cell providers started to allow users to send SMS messages to people on different networks.

Eminem has just released his best-selling album "The Marshall Mathers LP". Hugh Grant and Elizabeth Hurley have announced that they are ending their relationship. If you were to travel back to this day, notable figures such as David Tomlinson, Walter Matthau, Yokozuna and Dale Earnhardt would all be still alive.

On TV, people are watching popular shows such as "The X-Files", "Friends", "3rd Rock from the Sun" and "Two Guys, a Girl and a Pizza Place". Meanwhile, gamers are playing titles such as "Pokémon Red and Blue", "Dino Crisis", "Grand Theft Auto 2" and "Resident Evil – Code: Veronica". Children and teenagers are currently watching television shows such as "The Angry Beavers", "That '70s Show", "The Powerpuff Girls" and "Rocket Power".

Popular toys at the moment include the likes of Groovy Girls, the Game Boy Color, the Dreamcast and Poo-Chi (robot dog).

Notable events that occurred around May 28th, 2000.

If you are looking for some childhood nostalgia, then check out May 28th, 2006 instead.

Historical weather information for May 28th, 2000.

Bill Clinton was the President of the United States on May 28th, 2000.

Tony Blair was the Prime Minister of the United Kingdom on May 28th, 2000.