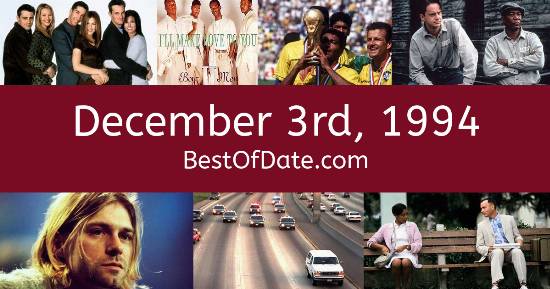 Songs that were on top of the music singles charts in the USA and the United Kingdom on December 3rd, 1994.

The movie "The Santa Clause" was at the top of the Box Office on December 3rd, 1994.

The date is December 3rd, 1994, and it's a Saturday. Anyone born today will have the star sign Sagittarius. Currently, people are enjoying their weekend.

The Christmas season of 1994 has began. In America, the song I'll Make Love To You by Boyz II Men is on top of the singles charts. Over in the UK, Let Me Be Your Fantasy by Baby D. is the number one hit song.

Bill Clinton is currently the President of the United States, and the movie The Santa Clause is at the top of the Box Office. In the United Kingdom, John Major is the current Prime Minister. Meanwhile, in technology news, a relatively new storage format called the CD is beginning to outpace the regular cassette tape in music sales. The disc-based format gives listeners the ability to skip between songs instead of having to manually rewind and forward.

It's 1994, so radio stations are being dominated by the likes of All-4-One, Boyz II Men, R. Kelly, Céline Dion, Bruce Springsteen, Bryan Adams, Meat Loaf, Bon Jovi, Wet Wet Wet, Rednex and Mariah Carey. In Europe, a war is continuing to rage on in Bosnia and Herzegovina. In Finland, voters have rejected the chance to join the European Union. In the United States, serial killer Jeffrey Dahmer has been beaten to death in prison. Meanwhile, in music news, Irish boyband "Boyzone" have released their new single "Love Me for a Reason".

Rap star Tupac Shakur is currently recovering from his injuries after he was robbed and shot five times in the lobby of Quad Recording Studios in Manhattan. In celebrity news, actor Richard Gere and supermodel Cindy Crawford have announced they are separating after four years of marriage. On television, the final episode of "Clarissa Explains It All", starring Melissa Joan Hart, has just been aired. The teen sitcom had been running since 1991.

If you were to travel back to this day, notable figures such as Richey Edwards, Eazy E, Selena and Bob Ross would all be still alive. On TV, people are watching popular shows such as "Melrose Place", "The X-Files", "Lois & Clark: The New Adventures of Superman" and "Babylon 5". Meanwhile, gamers are playing titles such as "Mortal Kombat", "Jungle Strike", "The Jungle Book" and "Earthworm Jim".

Kids and teenagers are watching TV shows such as "Goof Troop", "The Nanny", "Weird Science" and "All That". Popular toys at the moment include the likes of the Easy-Bake Oven, Micro Machines, the Super Nintendo Entertainment System (SNES) and the Talkboy.

These are trending news stories and fads that were prevalent at this time. These are topics that would have been in the media on December 3rd, 1994.

News stories, pop culture trends, and other events that happened around December 3rd, 1994.

Check out our personality summary for people who were born on December 3rd, 1994.

If you are looking for some childhood nostalgia, then you should check out December 3rd, 2000, instead.

Celebrities, historical figures, and other notable people who were born on December 3rd.

Bill Clinton was the President of the United States on December 3rd, 1994.

Find out what your age was on December 3rd, 1994, by entering your DOB below.
This information is not saved on our server.

Here are some fun statistics about December 3rd, 1994.