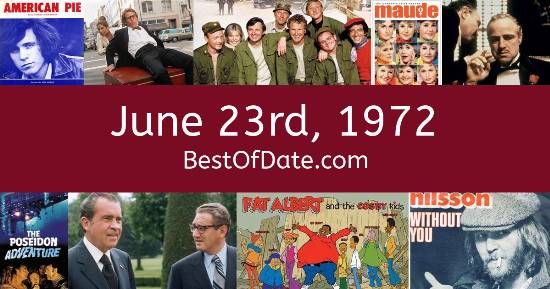 On June 23rd, 1972, the following songs were at the top of the music charts in the USA and the UK.

The date is June 23rd, 1972, and it's a Friday. Anyone born today will have the star sign Cancer. Currently, people have "that Friday feeling" and are looking forward to the weekend.

It's summer, so the temperatures are warmer and the evenings are longer than usual. In America, the song Candy Man by Sammy Davis jr. is on top of the singles charts. Over in the UK, Vincent by Don McLean is the number one hit song.

It's 1972, so radio stations are playing songs from artists such as Don McLean, Harry Nilsson, Hot Butter, Neil Young, The Moody Blues, Roberta Flack, Bill Withers and Johnny Nash. If you were to travel back to this day, notable figures such as Jackie Robinson, Janet Munro, Harry S. Truman and Lyndon B. Johnson would all be still alive. On TV, people are watching popular shows such as "Gunsmoke", "McCloud", "The Mary Tyler Moore Show" and "The Two Ronnies".

Children and teenagers are currently watching television shows such as "Captain Kangaroo", "My Three Sons", "JOT the Dot" and "The Pink Panther Show". Popular toys at the moment include the likes of Etch A Sketch, the Easy-Bake Oven, Twister mat and Big Jim (action figure).

These are trending news stories and fads that were prevalent at this time. These are topics that would have been in the media on June 23rd, 1972.

News stories, pop culture trends, and other events that happened around June 23rd, 1972.

Check out our personality summary for people who were born on June 23rd, 1972.

Television shows that people were watching in June, 1972.

If you are looking for some childhood nostalgia, then you should check out June 23rd, 1978, instead.

Celebrities, historical figures, and other notable people who were born on June 23rd.

Richard Nixon was the President of the United States on June 23rd, 1972.

Find out what your age was on June 23rd, 1972, by entering your DOB below.
This information is not saved on our server.