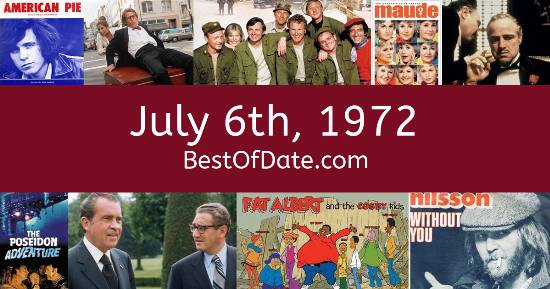 Songs that were on top of the music singles charts in the USA and the United Kingdom on July 6th, 1972.

The date is July 6th, 1972 and it's a Thursday. Anyone born today will have the star sign Cancer. The 4th of July celebrations in America have come and passed.

It's summer, so the temperatures are warmer and the evenings are longer than usual. In America, the song Song Sung Blue by Neil Diamond is on top of the singles charts. Over in the UK, Take Me Back 'ome by Slade is the number one hit song.

On TV, people are watching popular shows such as "Columbo.", "Here's Lucy", "McCloud" and "The Flip Wilson Show". Kids and teenagers are watching TV shows such as "Underdog", "The Pink Panther Show", "The Brady Bunch" and "The Clangers". If you're a kid or a teenager, then you're probably playing with toys such as Etch A Sketch, Motorific (slot car toys), Uno (card game) and Big Jim (action figure).

Celebrities, historical figures and notable people who were born on the 6th of July.

Richard Nixon was the President of the United States on July 6th, 1972.

Edward Heath was the Prime Minister of the United Kingdom on July 6th, 1972.

Enter your date of birth below to find out how old you were on July 6th, 1972.

Here are some fun statistics about July 6th, 1972.

Leave a comment and tell everyone why July 6th, 1972 is important to you.