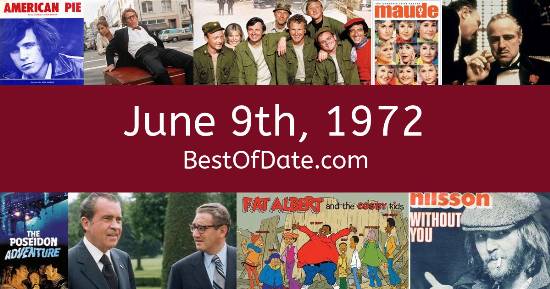 Songs that were on top of the music singles charts in the USA and the United Kingdom on June 9th, 1972.

The date is June 9th, 1972 and it's a Friday. Anyone born today will have the star sign Gemini. Currently, people have "that Friday feeling" and are looking forward to the weekend.

It's summer, so the temperatures are warmer and the evenings are longer than usual. In America, the song I'll Take You There by Staple Singers is on top of the singles charts. Over in the UK, Metal Guru by T. Rex is the number one hit song.

It's 1972, so radio stations are playing songs from artists such as Don McLean, Harry Nilsson, Hot Butter, Neil Young, The Moody Blues, Roberta Flack, Bill Withers and Johnny Nash. On TV, people are watching popular shows such as "Gunsmoke", "Rowan & Martin's Laugh-In", "The Brady Bunch" and "The Sonny & Cher Comedy Hour". Kids and teenagers are watching TV shows such as "Lassie", "My Three Sons", "JOT the Dot" and "The Pink Panther Show".

Popular toys at the moment include the likes of Etch A Sketch, Rock 'Em Sock 'Em Robots, Frisbee and Kenner SSP Racers.

If you are looking for some childhood nostalgia, then check out June 9th, 1978 instead.

Actress.
Born on June 9th, 1981
She was born exactly 9 years after this date.

Richard Nixon was the President of the United States on June 9th, 1972.

Edward Heath was the Prime Minister of the United Kingdom on June 9th, 1972.

Enter your date of birth below to find out how old you were on June 9th, 1972.

Here are some fun statistics about June 9th, 1972.