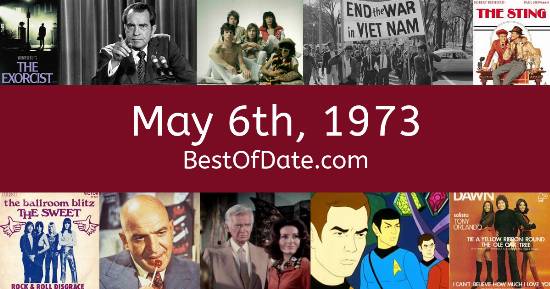 Songs that were on top of the music singles charts in the USA and the United Kingdom on May 6th, 1973.

The date is May 6th, 1973 and it's a Sunday. Anyone born today will have the star sign Taurus. Currently, people are enjoying their weekend.

The summer of 1973 has finally arrived. The weather has warmed up and the evenings are brighter than usual. The song Tie A Yellow Ribbon Round The Ole Oak Tree by Dawn is on top of the singles charts in both the USA and the United Kingdom. Richard Nixon is currently the President of the United States and Edward Heath is the Prime Minister of the United Kingdom.

Meanwhile, gamers are playing titles such as "Pong". Kids and teenagers are watching TV shows such as "Captain Kangaroo", "The Pink Panther Show", "Fat Albert and the Cosby Kids" and "The Adventures of Black Beauty". If you're a kid or a teenager, then you're probably playing with toys such as the Easy-Bake Oven, Nerf Balls, VertiBird (toy helicopter) and Baby Alive (doll).

Notable events that occurred around May 6th, 1973.

Richard Nixon was the President of the United States on May 6th, 1973.

Edward Heath was the Prime Minister of the United Kingdom on May 6th, 1973.

Enter your date of birth below to find out how old you were on May 6th, 1973.

Leave a comment and tell everyone why May 6th, 1973 is important to you.