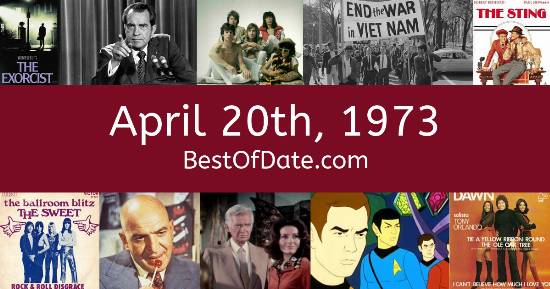 Songs that were on top of the music singles charts in the USA and the United Kingdom on April 20th, 1973:

The date is April 20th, 1973 and it's a Friday. Anyone born today will have the star sign Taurus. Currently, people have "that Friday feeling" and are looking forward to the weekend.

The summer of 1973 is drawing closer and temperatures have started to rise. The song Tie A Yellow Ribbon Round The Ole Oak Tree by Dawn is on top of the singles charts in both the USA and the United Kingdom. Richard Nixon is currently the President of the United States and Edward Heath is the Prime Minister of the United Kingdom.

It's 1973, so radio stations are playing songs from artists such as The Rolling Stones, Tony Orlando & Dawn, Sweet, Elton John, Roberta Flack, Carly Simon, Marvin Gaye and Jim Croce. People are watching popular TV shows such as "Gunsmoke", "The Brady Bunch", "Last of the Summer Wine" and "Barnaby Jones". Meanwhile, gamers are playing titles such as "Pong".

Kids and teenagers are watching TV shows such as "Mister Rogers' Neighborhood", "Sesame Street", "Fat Albert and the Cosby Kids" and "The Adventures of Black Beauty". If you're a kid or a teenager, then you're probably playing with toys such as "Lite-Brite", "Clackers", "Weebles" and "Magnavox Odyssey".

Celebrities and historical figures that were born on the 20th of April:

Who was the Prime Minister of the United Kingdom on April 20th, 1973?

Enter your date of birth below to find out how old you were on April 20th, 1973.

Looking for some nostalgia? Here are some Youtube videos relating to April 20th, 1973. Please note that videos are automatically selected by Youtube and that results may vary! Click on the "Load Next Video" button to view the next video in the search playlist. In many cases, you'll find episodes of old TV shows, documentaries, music videos and soap dramas.