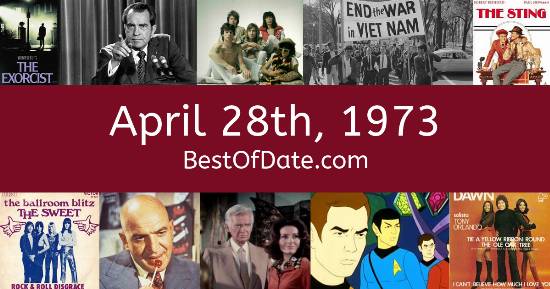 Songs that were on top of the music singles charts in the USA and the United Kingdom on April 28th, 1973.

The date is April 28th, 1973 and it's a Saturday. Anyone born today will have the star sign Taurus. Currently, people are enjoying their weekend.

The summer of 1973 is drawing closer and temperatures have started to rise. The song Tie A Yellow Ribbon Round The Ole Oak Tree by Dawn is on top of the singles charts in both the USA and the United Kingdom. Richard Nixon is currently the President of the United States and the movie Soylent Green is at the top of the Box Office.

If you were to travel back to this day, notable figures such as Bruce Lee, J. R. R. Tolkien, Gram Parsons and Oskar Schindler would all be still alive. On TV, people are watching popular shows such as "Steptoe and Son", "Room 222", "The Mary Tyler Moore Show" and "The Odd Couple". Meanwhile, gamers are playing titles such as "Pong".

Children and teenagers are currently watching television shows such as "JOT the Dot", "The Banana Splits", "Help!... It's the Hair Bear Bunch!" and "The Electric Company". Popular toys at the moment include the likes of Twister mat, Lite-Brite, Frisbee and Baby Alive (doll).

If you are looking for some childhood nostalgia, then check out April 28th, 1979 instead.

Spanish actress.
Born on April 28th, 1974
She was born exactly one year after this date.

American actress.
Born on April 28th, 1981
She was born exactly 8 years after this date.

English TV personality. Deceased
Born on April 28th, 1982
She was born exactly 9 years after this date.

Spanish soccer player.
Born on April 28th, 1988
He was born exactly 15 years after this date.

Internet celebrity.
Born on April 28th, 1992
She was born exactly 19 years after this date.

Richard Nixon was the President of the United States on April 28th, 1973.

Edward Heath was the Prime Minister of the United Kingdom on April 28th, 1973.

Enter your date of birth below to find out how old you were on April 28th, 1973.