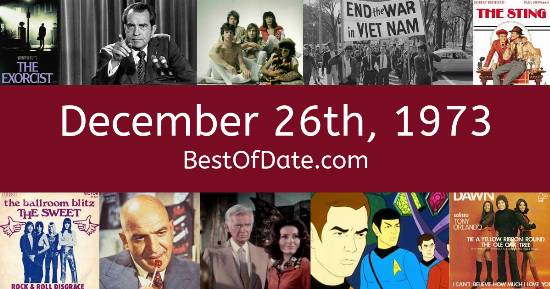 Songs that were on top of the music singles charts in the USA and the United Kingdom on December 26th, 1973.

The date is December 26th, 1973 and it's a Wednesday. Anyone born today will have the star sign Capricorn. Christmas Day of 1973 has just passed and many people are relaxing at home and enjoying the holiday season.

In America, the song Time In A Bottle by Jim Croce is on top of the singles charts. Over in the UK, Merry Xmas Everybody by Slade is the number one hit song. Richard Nixon is currently the President of the United States and the movie Serpico is at the top of the Box Office.

A horror film called "The Exorcist" is currently being shown in movie theaters. If you were to travel back to this day, notable figures such as Oskar Schindler would be still alive. On TV, people are watching popular shows such as "What's My Line?", "McMillan & Wife", "The Waltons" and "M*A*S*H".

Meanwhile, gamers are playing titles such as "Pong", "Space Race" and "Gotcha". Children and teenagers are currently watching television shows such as "Underdog", "Sesame Street", "Fat Albert and the Cosby Kids" and "Star Trek: The Animated Series". If you're a kid or a teenager, then you're probably playing with toys such as the Easy-Bake Oven, Lite-Brite, Battleship (game) and Clackers.

If you are looking for some childhood nostalgia, then check out December 26th, 1979 instead.

Soccer player.
Born on December 26th, 1990
He was born exactly 17 years after this date.

TikTok personality. Deceased
Born on December 26th, 2002
He was born exactly 29 years after this date.

Richard Nixon was the President of the United States on December 26th, 1973.

Edward Heath was the Prime Minister of the United Kingdom on December 26th, 1973.

Enter your date of birth below to find out how old you were on December 26th, 1973.

Here are some fun statistics about December 26th, 1973.