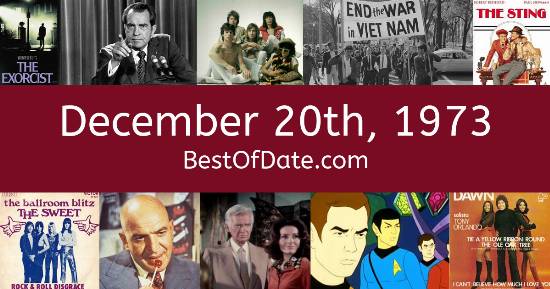 Songs that were on top of the music singles charts in the USA and the United Kingdom on December 20th, 1973.

The date is December 20th, 1973 and it's a Thursday. Anyone born today will have the star sign Sagittarius. Christmas Day of 1973 is fast approaching and the excitement is building. Department stores are thronged with Christmas shoppers.

In America, the song The Most Beautiful Girl by Charlie Rich is on top of the singles charts. Over in the UK, Merry Xmas Everybody by Slade is the number one hit song. Richard Nixon is currently the President of the United States and the movie The Way We Were is at the top of the Box Office.

If you're a kid or a teenager, then you're probably playing with toys such as Etch A Sketch, Battleship (game), Nerf Balls and Big Jim (action figure).

If you are looking for some childhood nostalgia, then check out December 20th, 1979 instead.

Soccer player.
Born on December 20th, 1980
He was born exactly 7 years after this date.

Soccer player.
Born on December 20th, 1991
He was born exactly 18 years after this date.

Chinese actor.
Born on December 20th, 1998
He was born exactly 25 years after this date.

Richard Nixon was the President of the United States on December 20th, 1973.

Edward Heath was the Prime Minister of the United Kingdom on December 20th, 1973.

Enter your date of birth below to find out how old you were on December 20th, 1973.

Here are some fun statistics about December 20th, 1973.