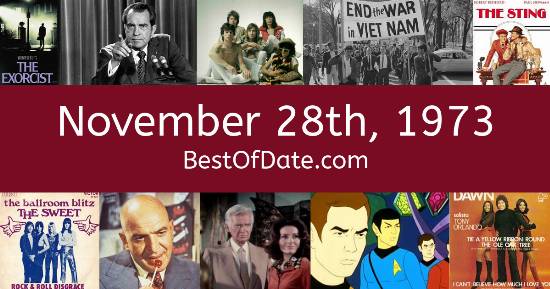 On November 28th, 1973, the following songs were at the top of the music charts in the USA and the UK.

The top "Box Office" movie on this date was the film "The Way We Were".

The date is November 28th, 1973, and it's a Wednesday. Anyone born today will have the star sign Sagittarius. It's November, so the evenings are getting darker and the days are getting colder.

In America, the song Top Of The World by Carpenters is on top of the singles charts. Over in the UK, I Love You Love Me Love by Gary Glitter is the number one hit song. Richard Nixon is currently the President of the United States, and the movie The Way We Were is at the top of the Box Office.

If you were to travel back to this day, notable figures such as Oskar Schindler would be still alive. On TV, people are watching popular shows such as "Hawaii Five-O", "Marcus Welby, M.D.", "The Sonny & Cher Comedy Hour" and "M*A*S*H". Meanwhile, gamers are playing titles such as "Pong", "Space Race" and "Gotcha".

Children and teenagers are currently watching television shows such as "Scooby-Doo, Where Are You!", "Sesame Street", "Sabrina the Teenage Witch" and "Help!... It's the Hair Bear Bunch!". Popular toys at the moment include the likes of Etch A Sketch, Crissy (doll), Weebles and Uno (card game).

These are trending news stories and fads that were prevalent at this time. These are topics that would have been in the media on November 28th, 1973.

Check out our personality summary for people who were born on November 28th, 1973.

Television shows that people were watching in November, 1973.

Popular video games that people were playing in November of 1973.

If you are looking for some childhood nostalgia, then you should check out November 28th, 1979 instead.

Singer.
Born on November 28th, 1979
He was born exactly 6 years after this date.

Rapper.
Born on November 28th, 1979
He was born exactly 6 years after this date.

Love Island contestant.
Born on November 28th, 1997
She was born exactly 24 years after this date.

Richard Nixon was the President of the United States on November 28th, 1973.

Edward Heath was the Prime Minister of the United Kingdom on November 28th, 1973.

Enter your date of birth below to find out how old you were on November 28th, 1973.
This information is not transmitted to our server.

Here are some fun statistics about November 28th, 1973.